CNN: Hate Groups On The Rise 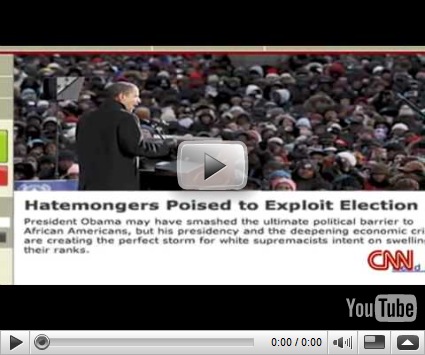 Isn’t it lovely that David Duke doesn’t feel that Obama should be killed?

Any violence against the president by a deranged white person, would be a catastrophic act for white Americans, because it would inflate Obamas stature.

The statements by Duke, though calling for a non violent approach still dehumanize Obama.   To him and his white supremacist supporters, Obama represents a threat to unearned white privilege.

I didn’t need to see this report to know that there has been a rise in hate crime,  simply listening to the news since November it is quite obvious that blackness is under attack.  We have seen violent act after violent act; however they have all been constructed as individual acts.  Just as we view racism as systemic so to should we view any and all attempts by whiteness to maintain its unearned privilege.

Once again I feel it is necessary to point out that there is a difference between the right to free speech and the right to hate speech.  Though some would claim that this is a subjective decision such language that creates someone as less than leaves them vulnerable to attack.

It is not at all accidental that Keith Luke spent his spare time on white supremacist websites prior to  his violent shooting of three POC.   It is there that he learned that his colour granted him the right to attack others because of what he saw as inferiority based solely on the color of skin.

There is a difference between hate speech and free speech.  These comments are not only offensive but they supply the groundwork that legitimizes the stigmatization of POC.  One does not need to directly call for violence to create violence and the case of Keith Luke clearly illustrates that point.  In a society that only respects power the  purposeful targeting of POC combined with the history of violence that has committed against us, only ensures that such behaviour will continue to be acceptable.  To normalize hate is to agree that some deserve to be abused because of the colour of their skin.

It is simply not possible to justify that hate speech in any way is part of a public good or necessity. In fact it leads to a fractious society wherein those with unearned advantage constantly seek to employ power in coercive ways.  This is not a matter of a simply disagreement of position, this is the calculated devaluation of a group of people for the purposes of maintaining a social hierarchy that has proven to be destructive.  If we cannot yell fire in a crowded theatre, how can we possibly legitimize the continued hate spewed by these groups?  It is nefarious, scurrilous and counter to any form of progression.