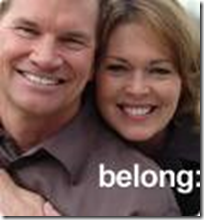 I am writing this as I am watching the Haggards do an an interview on Oprah Winfrey.   Even though Ted has come out of the closet and admitted to sexual improprieties. He  is still having difficulty identifying as anything other than heterosexual.   It is not for me to say that the man is gay however, he certainly is not straight, at the very least he is bisexual.

Oprah continued to push for an admission of his homosexuality, but his firm belief that homosexuality is a sin caused him to deny that the very potential exists for him to be gay.  He  said that he is a “heterosexual with homosexual attachments. Sexuality is complex. I was deeply in love with my wife.... Oops, I mean am! Am! “. It smells like denial to me though.

Mrs. Haggard you need to just come to the realization that you married a man that just isn’t into women.  You are not the first woman to make such a mistake but standing by his side and encouraging him to live a lie is not supportive.  If you love someone, you encourage them to be their truest self and seek happiness.

He openly claims to still fantasize about men sexually, and is still attracted to men.  “I do have sexual thoughts about men, but they're not compulsive anymore". I thought I could pray away the gay”. You are asking him to spend the rest of his life denying his sexual leanings so that you can continue on in this masquerade.

While I feel for your hurt and your pain, neither of you can truly be happy living a lie.   Though your husband claims that he believes that God loves him as he is, his unwillingness to even consider homosexuality as anything other than a sin is clearly hampering his ability to discover who he really is. “God's ideal is heterosexual, monogamous relationships. Ideal is no divorce”.

Seriously Gayle how many men have to pop out of the wood work for you to come to the realization that holding on to someone like this is not an act of love but ultimately a selfish thing to do?  Sitting on the Oprah show and announcing to the world that “this is a choice”, does not make it so and I think in your most private moments you know the truth of that.

Though Ted claims that he would have killed himself had  Gayle decided to leave him,  by staying with her as a shelter from the storm he has failed to truly take the time to discover who he really is. These so called cravings cannot be willed away, and no amount of prayer is going to change his identity.  Ted remains a man that hates himself because the God that he has chosen to believe in does not accept all of his creations.

Christianity and homosexuality are not at odds with each other despite what the right wing fundies would have us believe.   Jesus himself made no proscriptions against homosexual sex.   I personally believe that the current state of social unrest in terms of sexuality has more to do with our social discomfort dealing with gender and sexuality than it does with the actual acts themselves.  It is only when homosexuality became stigmatized in the 1800s as a form of inversion and or sickness do we find this a problematic identity.

From the beginning of time sexuality has always been fluid we have only normalized certain identities to create a hierarchy that we are socially comfortable with.  We view the world in binaries and therefore just as we see heterosexuality as good, we deem homosexuality as bad. We need to move beyond this modernist understanding of the world as it only hampers our ability to understand the complexities of the human experience.

So Haggards, while who you choose to sleep with is really none of business your insistence in publicly presenting the falsehood that Ted can deny his sexual leanings for a lifetime is ridiculous.  If you must live a lie can you not do so in private, so that those who are struggling to accept themselves are not  further troubled by the dichotomy that you are presenting?  Teenagers do not need to hear that being gay or lesbian is the same as a fall from grace at a time when they are discovering who they are.

Finally to Gayle, when he does cheat again, and he will, remember that you heard it here first.  Holding on to someone who is incapable of returning your feelings is wrong.  Ted may indeed love you but not in the physical ways that hetero women desire to be loved.