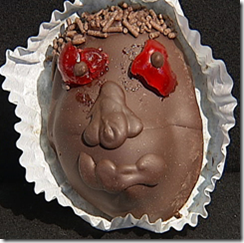 While many across the globe celebrated the inauguration of Barack Obama, one celebrity bakery was selling Obama Heads.  Ted Kefalinos, proprietor of Lafayette French Pastry declared that Obama “is following in the footsteps of Lincoln and would get his.”  When questioned by Fox news, he denied that it was a threat and inferred that he was only commenting on the fact that both Lincoln and Obama were from Illinois.

The proper name for these cookies according to Kefalinos is Drunken Negro cookies.  He claims to have taken a census of his regular customers to find out if these were racist and was informed that they were not offensive.  He thinks that these are just a funny face and could not possibly be construed as racist because…wait for it….he has a Cuban brother in law. Are you as relieved as I am by that?  According to one customer who attended his shop, he was actually offering the cookies for sale as drunken nigger cookies, a claim that the socially progressive Kefalinos denies.

I am so comforted to know that the election ended all of the problems of racism in this world and that we are all officially colour blind.  With people as committed to equality as Kefalinos the world is definitely headed in a wonderful direction.  We should all thank Obama for waving his magic wand last Tuesday thus creating this post racial world.  Did you ever think you would see a time when whiteness went as far as to labour to make cookies to reflect our majesty? I’m overcome, now if only I could swallow enough killer kool aid to make me believe all of this crap.  To all you post racial enthusiasts, we can see the little man behind the curtain pulling your strings.