When a politician resigns it is usually do to some misconduct on their part.  In the case of Charles Tyson, he was forced to resign due to racist threats. 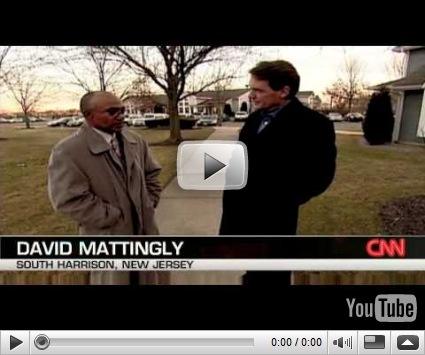 According to MSBNC, “Some residents in the town see it as a political rather than a racial issue. They claim Tyson plays the race card whenever he gets criticized.”

Here we go again with the playing the race card, when a POC is subject to racism.  It is not for a white person to say what is and isn’t racist because they do not have the life experience to be able to make the judgement call.  Until you live as a racially oppressed individual, you can never have a complete understanding of what it means to be targeted because of the colour of your skin.

The Philadelphia Inquirer reports,”  Soon after Tyson, a retired computer technician, was elected mayor in this rural community of 2,700, he said he received a dozen phone calls and several e-mails warning he was being watched and labeling him a dead man, using a racist epithet.

No arrests were made, and investigators said the caller or callers in 2007 used untraceable disposable phones. His tires were also slashed and his lawn sign was defaced with "KKK."

Is it any wonder that after being treated like this he feared for his life enough to resign his position?  If a black mayor can undergo such attacks from racists, what has the response really been to Obama?  I suspect that the secret service has not made the public aware of the degree of threat that he faces.

There has been repeated commentary across the internet that Tyson is inflating the degree of threat that he faced however, racism is understood by how each individual is impacted and therefore what might be tolerable to some, is deemed assaultive by others.  Had I received the following commentary, I would have felt attacked and threatened.

Dear Mayor Charles Tyson:
I recently read of the racism you've faced in Harrisonville, New Jersey, and I wanted to make something perfectly clear:
a) You are a nigger unworthy to govern over any white man; and,
b) Fuck you. You've gotten exactly what you deserve from your constituents.
Unfortunately, the days when white men would simply burn the local newspaper and run nigger officials out with tar and feathers are past. However, your incidents give me hope that perhaps we shall see them again.
Bill White, Commander
American National Socialist Workers Party
PS: We know you live at (Phone number and address have been redacted) I just spoke to your wife Carolyn. I hope you got my message.

We all got the message loud and clear.  Racism continues to plague this society no matter what the feel good post racial crowd would like us to believe.  Tyson serves as a small example of exactly why the election of Obama does not mean that we have reached a turning point in race relations.  He like Obama was a first and the penalty for daring to believe that he had the right to serve like any other American was death threats.

Each time someone who is black attempts to assert our shared humanity, we are instantly subjected to racist assaults.  Some come in the obvious form of racial epithets and death threats, while others are far more covert.  As I have repeatedly said, whiteness will always act in its own defence to preserve its unearned racial privileges.  We are continually subjected to commentary calling us overly sensitive or challenging whether or not something is actually racist eg, the race card, or even a declaration that this is fringe behaviour and therefore should be dismissed.

As POC, we cannot afford to dismiss a single racist action, thought, or deed, because combined it serves to maintain our status at the bottom of the race and class hierarchy.  The ability to dismiss racism is the preserve of those that exist with privilege,  it is not white blood that flows down the streets, pooling and coagulating from hatred.

I continue to blog about the racist incidents that I come across because we need to by hyper vigilant.  There is a tendency to say that things are not so bad, or look how far we have come and this negates the degree of racism still faced on a daily basis by POC.  Even those that claim to be liberal or anti racist in their approach, often fail to be cognizant of the ways in which their behaviour maintains white hegemony.  We may no longer be slaves, but we still live under a neo- Jim Crow system wherein worth and value are often strictly determined by race.

Often the first response to racism is to silence those critiquing privilege.  If we don’t talk about it, it won’t go away.  Silencing comes in the form of belittling the speaker, or trying to redirect the conversation, anything to avoid dealing with the issue at hand.  What is ironic is that those who attempt to silence are rarely cognizant that they are invoking the same privilege that is being critiqued.  We may have come along way but until people start to realize the ways in which the system is skewed to defend and protect whiteness, blackness will continue to be under assault.

I speak out because I have no choice.  I am black and so are my children. To be silent would be to accept my status as a second class citizen and doom my children to the same.  I cannot afford to play sambo and dance with joy because the physical chains have been removed, while we continue to live as a colonized people in a so called free state.  Freedom means freedom from any and all oppressions, and it is clear that dream is still to be fulfilled.