The great denial. How many times have you heard someone say that they were x.y.z, and therefore did not qualify as a body of privilege, or that it was impossible for them to hold any biases, or prejudices in their heart?  This meme has been repeated over and over again to deny the different ways in which bodies are encoded with power.

If you are a bourgeoisie white gay male,  you are a marginalized body in this society; however homosexuality does not remove the fact that you will still benefit from gender, race, able bodied and western privilege. 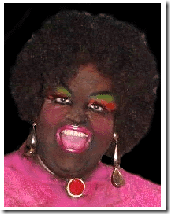 Just because someone is a stigmatized body does not necessarily mean that they will not use their privileges to create different groups as "other". The perfect example of this is Chuck Knipp AKA Shirley Q Liquor .  Knipp is a white gay male who makes his living performing in black face in a so-called homage to black women. In his "tribute" the character that he has constructed is not only highly racist, it is sexist.   Apparently, this is what passes as satire in Kripps mind and therefore we should not find it offensive.  He is after all  a man that society has constructed as less than, and therefore deserves a free pass to demean at will.

According to Jasymne Cannick,"Knipp describes Liquor as being "a welfare mother with nineteen kids who guzzles malt liquor, and drives a Caddy." The character is favorite among his core audience whom Knipp describes as being "gay men, their moms and rednecks." And while Isaiah Washington was unable to escape the wrath of gay America, Charles Knipp’s blackface minstrel show continues to be rewarded by gay Americans to the tune of $90K annually. "

If you are dealing with a site or multiple sites of oppression not acknowledging the ways in which you are privileged simply perpetuates the same isms that work to construct you as less than.  Rather than acknowledging his privilege Kripp has decided to perform a genderized, racist, new age, minstrel show.

I have repeatedly said that the gay community is simply a reflection of the larger society from which it is drawn.  Though gays and lesbians come in various races, creeds it is still lead by bourgeoisie elite white males of privilege.  There is the idea that somehow because someone is gay, or lesbian that one is necessarily more liberal, or leftist in their thought process; however the fauxgressive nature of the movement is immediately evident when one examines the power structure behind the organizing drives.

Shirley Q Liquor is a visible sign of the racism within the community.  The same people who had the nerve to declare gay the new black have been resoundingly silent about this performance.  In a drive to demand their rights for social equality, it is more than clear that there are those that believe that it is best achieved by reasserting the same hierarchy that is limiting their lives by using their social power to demean WOC.

Demeaning us (read: POC) will not elevate you, because the straight, cissexist, white males, that you seek equality with already views us as lesser than.  Proving that you may behave in a similar manner will not make you their equal.  This is the same routine often acted out by the black male patriarchy and it is clear that despite their repression of black women, white males still view them as second class citizens.

We should be allies, we are both trapped in a system that seems determined to view some bodies as valuable and some bodies as disposable, yet due to your desire to achieve equality through the repression of others, we must look at you with distrust.  Our solidarity is demanded, there are black gays we are told (as though we do not know this), but your whiteness and your repeated inability to acknowledge the privilege that you still possess causes  anger and resentment rather than comradeship.

I will call openly for an end to homophobia because it is wrong.  No human should be mistreated and abused because of sexuality but at the same time I respectfully demand that you begin to clean your house.  It is time for the GLBTQI community to begin to take an intersectional approach to its organizing efforts.  It is time that the GLBTQI community to consciously realize that rebuilding the same power differential will only continue to cause anger and resentment.  If you want the respect of the black community you need to begin by acknowledging the ways in which the movement is racist.

Say it with me, gay is not the new black.  African- Americans did not cause the passing of prop 8, and the gay community does not have the right to compare its struggles to the black civil rights movement.  Do not throw us under the bus before we have a chance to fight siting at the back of it.