Since the blame the blacks meme that resulted from the passing of prop 8, I have posted quite frequently about racism in the GLBT community.  Despite how many examples I point to, like the It's Just Like Rosa Parks argument, gay is the new black,  or the racist, genderized minstrel show, Shirley Q Liquor, many in the GLBT community choose to pretend that racism is non existent.  Those that demand an intersectional approach to gay and lesbian organizing efforts are repudiated with the attack that we belong to a naturally homophobic race, or that we are being "overly sensitive".  Both arguments are a strawmans argument, and exist to shut down discussion.

The fact of the matter is, that just like any other social grouping in the GLBT community, whiteness seeks to lead and make its issues primarily the focus for organizing.  In the most comprehensive study done of the the black GLBT population in 2002, 50% of the black GLBT respondents reported racism, or racist experiences when interacting within the GLBT community.  Clearly if 50% of the population is reporting a negative experience, this is not just something a few black activists are critiquing from a position of homophobia.

Same gender marriage has been the big organizing push in the gay community.  While it will lead to obvious benefits, many have pointed out that perhaps this serves white bourgeoisie needs more than it supports the population as a whole. 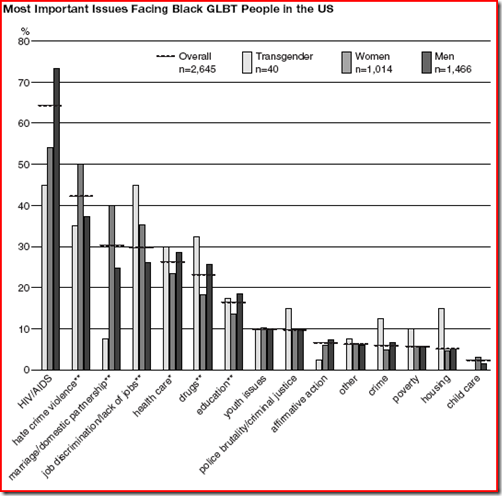 You will note that the number one concern is HIV/AIDS, followed by hate crime and violence.  Considering the the rate at which the disease is attacking the black community can this really be a surprise?

There is a serious disconnect between the white run GLBT organizing efforts and the black GLBT community.  The fact that critical voices are continually shouted down as too sensitive, reveals the length that whiteness will go to preserve its power even in marginalized groups.  The constant erasure of blacks is witnessed not only by those that are black GLBT but by any and all potential allies.  It encourages the false conception that same gender loving is something unique to whiteness and further encourages blacks not to identify as gay or lesbian as their primary identity. 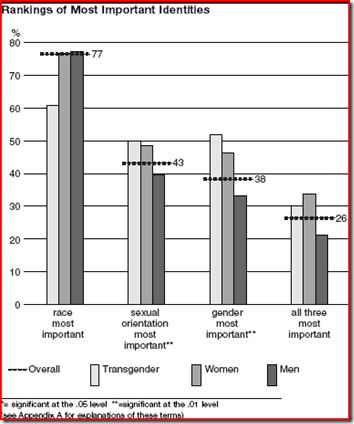 Despite being repeatedly told that blacks are extremely homophobic black GLBT members site race as their primary identity.  Now why would one want to identify with a group that completely rejects you? Could it possibly be that despite the mantra by the white bourgeoisie leaders of the GLBT community, that blacks are not necessarily any more homophobic than any other section of society?  Could it possibly be that the black honomophobe construction is dominant primarily to maintain white control over the movement?

Perhaps it is because black GLBT people  realize that their primary area of stigmatization is race.  This came as a surprise as I have often referred to racial discrimination as the first form of discrimination but not the primary one.  I made this assumption based in the ways my womanhood intersects with my race. 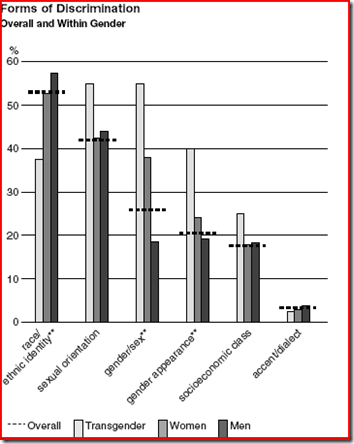 As they interact with the gay and lesbian community and continue to have negative experiences based in race, it only affirms race as an area that must be confronted if there is going to be any advancement at all in the organizing efforts. 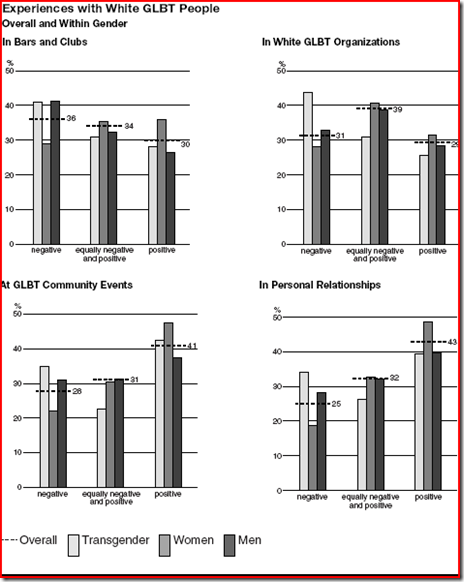 What is clear is that the GLBT community needs to make intersectionality a primary focus of any and all organizing efforts.  Continuing to privilege whiteness over seeking to deconstruct the ways in which race, class, sexuality and gender intersects means that the movement is necessarily fragmented.  You cannot strive for justice while still acting as an oppressor.

Well there it is in black and white and I am sure that someone will be right along to continue to deny that race is ignored in organizing efforts and that the white face of the GLBT community does not ignore the needs and desires of blacks. If the bourgeoisie white leaders invested half the time that they spent calling blacks homophobes and legitimately included a critique of race and sexuality into their organizing efforts, perhaps it would garner more support.

If people cannot see themselves reflected and then they hear from their GLBT black friends and family about the racism that they are facing within the GLBT community, they are less likely to be the committed ally that they should be.  Sexual discrimination is not a "white thing" and presenting it as such is harmful and reductive. Perhaps learning to share power would yield better results for all concerned.