H.W Bush Vows To Stay Out Of Wombs 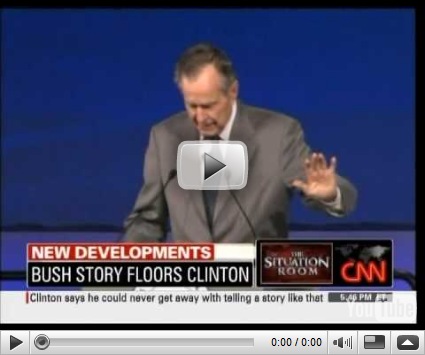 Considering the results of his efforts to mate, the world is thankful that he is vowing to stay out of a womb.  We certainly did not get a say in his reproduction decisions and look what happened – his idiot son damn near ran the US into the ground.

I do feel the need to point out that while he thinks this is just a cute joke, what he is once again doing is playing on stereotypes to make women look angry and irrational for demanding their rights.  Of course he had to describe her as angry and ugly,  everyone knows all the good looking  women don’t want control over their bodies.  You don’t want to be considered one of those ugly girls now do you ladies….what were you thinking using the brain that the Goddess gave you?

As for Clinton, fuck you too.  Seriously after all of the bullshit you watched your wife go through during her run for the white house, and you still think that it is okay to laugh at this demeaning shit.   This, from a man that claims to be pro-woman.  This is not some sort of witty repartee, this is the purposeful diminishment of women for demanding the right to control their reproduction.

Dear me, am I turning into one of those ugly angry women?  Considering that H.W has promised to stay away from women like myself, it makes it all the more appealing to be one of the angry ugly women.   I’d rather be miles away from him and be an autonomous being, than be one of the smiling idiots he so adores.