Justice Is A White Mans Word

Bernard Madoff ran a 50 billion dollar Ponzi scheme. Over the Christmas season he attempted to send jewellery to his sons and the prosecutor suspects that he is busy trying to hide assets.  At least one man has already committed suicide upon learning of the money that he lost by investing with him. Bernard Madoff is yet another example of the ways in which whiteness is privileged in the justice system. Many who invested their life savings with him are on the verge of financial disaster.  To him his victims were just faceless entities but the people who had their retirement savings invested with him, counted on him to be honest in his dealings.  Here we have a man who ran one of the biggest financial scams of all time and where is he sleeping - in his own bed.

Let's do a comparison between Bernard Madoff and 54 year old Roy Brown. 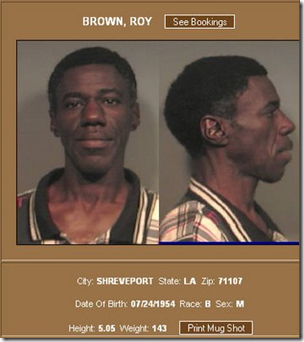 A man who said he robbed a downtown Shreveport bank because he was out of a job and hungry has been sentenced to 15 years in prison for first-degree robbery.
Roy Brown, 54, of Audrey Lane, pleaded guilty in Caddo District Court to robbing the Capital One bank in December 2007. Brown admitted walking up to a teller with one of his hands under his jacket and telling her it was a "stickup."
The teller handed the man three stacks of bills and he took a single $100 bill, told her he was homeless and left, police said.
Brown surrendered to police the next day, telling them his mother didn't raise him that way.
Police let him sober up and interviewed him two days later. Police said Brown told them he needed money to stay in a downtown detox center, had nowhere to stay and was hungry -- so he walked up the street and robbed the bank.

Here we have two vastly different interactions with the justice system; a black man who turned himself in after stealing one hundred dollars because he hungry and Madoff who stole billions to feed his greed and ego. How does the man who stole 100 dollars out of a sense of desperation merit 15 years in jail, while the billionaire sits in his luxurious home surrounded by his ill gotten gains?  Someone want to tell me again about how blind the justice system is?

It seems that as long as you have whiteness and wealth, justice is what you can afford, but for POC who are poor, "justice" is something we have yet to achieve. Though Brown clearly committed a crime his sentence reflects more about his blackness and class position than it does what he actually did wrong. What galls me the most about this is the fact that daily blackness is constructed as criminal; yet when someone who is white is commits a crime it is understood as an individual action.  Many white traders have been charged with embezzlement and insider trading, creating tragedy in their wake, and yet whiteness is not synonymous with thief and danger.  When we think of the person who is most likely to rob us blind, the image of a white man in a thousand dollar suit is not what instantly comes to mind.

The social construction of blackness as criminal is what allows the justice system to imprison generations of men.  It has emboldened the police to treat our lives as valueless, as they slaughter us and violently abuse us.  I am quite sure that Madoff did not for one moment believe that his life was in danger when he was arrested.  He knew without being told that his whiteness and  his wealth would protect him from any serious harm.  Watching the imbalance in a system that is supposedly blind proves once again that despite Obama wining the election, the US is a racist society, determined to maintain a strict hierarchy of worth and value based in whiteness and capitol.