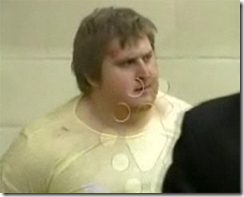 That is the face of pure hatred and his name is Keith Luke.  He went on a shooting spree in Brockton, after stockpiling weapons and ammunition.  "According to a police report, Luke told police he was "fighting extinction" of the white race and planned to kill blacks, Hispanics and Jews. He allegedly said he had intended to kill as many non-whites as possible before killing himself."

The 18-page report by Brockton and State Police painted a startling picture of sexual violence and racial hatred. It described Luke as an obese, young white man who lived with his mother and spent much of his time on the Internet surfing through racial propaganda.

At the end of his violence Arlindo Depina Goncalves  a homeless man is dead, Selma Goncalves is also dead and her sister is in critical condition after being raped and shot.  Though it was his plan to shoot himself in head, the police managed to apprehend him before he could carry out his plan.

Go ahead, I dare you to say that we are a post racial world.  Swear it on the lives of Arlindo Depina Goncalves,  Selma Goncalves, Oscar Grant, Adolph Grimes III, and Robbie Tolan.   Once again bodies of colour are deemed a threat to white hegemony.  Where was the shining bullet proof black president to protect these innocents?  As much as society wants to believe that Obamas election means that we have progressed socially, the blood of POC still flows freely at the behest of whiteness.

His lawyers are already saying that Luke is mentally unstable and this may well be the case; however his continual visitation of white supremacy hate sites certainly fed his delusion that whiteness is under threat by POC.  Sites like Stormfront act like a new age Klan meeting and function as a cyber gathering place for those who desire to not only privilege whiteness but to dehumanize all POC.

There is a difference between hate speech and free speech.  Some will stand by the slippery slope argument, believing that if we limit any speech we are denying freedom; however if speech purposefully dehumanizes another being, it necessarily encourages violence.  The first thing the Nazis did when they started attacking Jewish people was to construct them as not human and this provided the legitimation for their hate.  The moment we begin to see people as a sub species, it encourages others to believe that they have right to manifest their hatred in violent ways.  Hate groups hide behind free speech, and the ironic part is that they are an assault on freedom.

If he was indeed delusional, Luke’s violent fantasies were fed by groups like Stormfront.  These hate groups are not benign.  They encourage the dissonance of worth and value and are a cancer that we have allowed to flourish.  While many will say that what these hate groups have to say is indeed atrocious, few realize the ways in which they benefit from their existence.  By privileging whiteness as openly as they do they encourage others to continue to act in the interests of white hegemony.

Calling blacks niggers and jungle bunnies may be unacceptable to some, but it allows those who commit less of obvious acts of racism to point to groups like Stormfront and claim to be colour blind because their biases are not as readily apparent.  These less obvious acts of racism are just as damaging as the open aggressive hatred of white supremacists groups.

If this man is indeed mentally ill, I can forgive his actions; however I cannot give a free pass to those that fed his delusions for their own gain.  Larry King recently announced that his son wished that he was black, and in fact Larry declared that it is cool to be black.   When I hear statements like this I don’t see them as complimentary because they are not acknowledging the difficulties that blacks live with everyday.  It might be fun to be just like Oprah, Barack, Denzel or Will Smith however that is not the everyday lived experience of African Americans.

On a daily basis we come up against racism that is designed to devalue us to the very core of our being and this indeed is not cool.  Though we have allowed a few exceptional POC to achieve what I term “honorary whiteness”, for the majority of us, living as a POC in a society determined to privilege whiteness at every turn, means a daily struggle not to be consumed by hatred.  How “cool” was it to be black when Luke decided that we were a threat?