Love Hotels and Getting Your Kink On

In our most private moments we have sexual thoughts that we do not share with others.  Often times theses fantasies are constructed from some of the most disturbing aspects of society. The question is, is it permissible to encourage said fantasies by providing a venue in which people can act them out?

Wired reports on a love hotel in Japan designed to provide an element of privacy and fantasy for couples.  Most of the rooms are based upon female subjugation as mechanism to encourage sexual release. 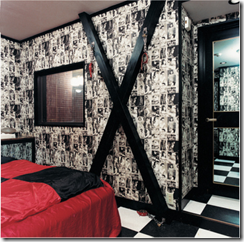 "The walls of the Sexy X Room are covered with photographs of tied-up Japanese women from the '80s. Imagine the thrill of cuffing your date to the giant black X, and then dominating her while looking at photos of thousands of other women who have been dominated before her." 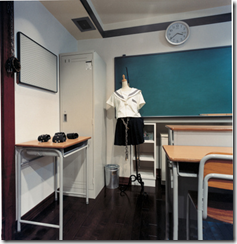 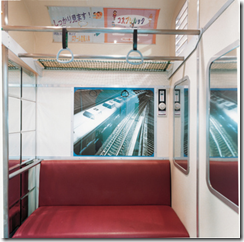 "Now that Japan has women-only subway cars and new anti-groping laws, it has become much harder for commute-time perverts to act out their fantasies. The Subway Room lets train fetishists relive the glory days, before women were empowered and trainmasters had the authority to impede skirt-flipping. It even features a button pervs can push to make subway sound effects." 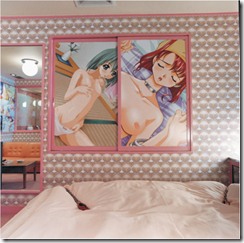 "People who would rather date Sailor Moon than their high school prom queen can check into the Manga Room. Submissive cartoon girls personifying the phrase "no means yes" watch over you as you do your thing. In a setting like this, handcuffs are indispensable."

All photos taken by Misty Keasler

The fantasies that this hotel promotes are not harmless.  Even though the people participating are well aware that their desires are not socially acceptable  in the larger world, the availability of these pleasure rooms provide a degree of legitimacy.  Though these rooms are rented by consenting adults I cannot help but notice that within these adult spaces, only one sex is granted a dominate position.  These rooms exist to promote male fantasies.

The submissive role of women encouraged by these rooms constructs women as existing only for male sexual pleasure.  There is no reciprocity, or even room to consider that women have sexual fantasies that require fulfillment as well.  While this behaviour is engaged in by consenting adults, it is far from problematic.

The fact that none of their rooms are dedicated to highlighting the ways in which women are sexual outside of the male gaze is particularly telling.  While these hotels continue to flourish they speak to the various ways in which women are highly constructed beings.  Though many would have us believe that we have moved to a post feminist time, the continuing desire of patriarchy to reduce women to living pleasure dolls stands as proof that we have not yet reached a stage of true equality.