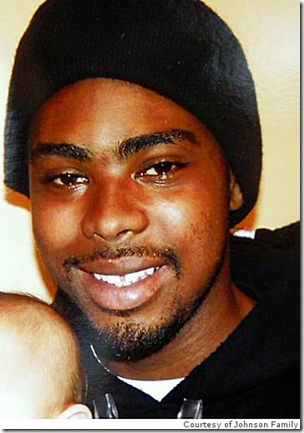 He was 22 years old and the father of a 4 year old girl.  He was black and human.  Now he is dead, forever lost to those that loved him, a victim of police violence and racism.  Earlier this week when I posted I am Sean Bell: A Mothers Lament, one of the commenter's told me that it was wrong to teach my black sons to fear the police.  Today when I saw the video of the death of Oscar Grant I knew that my fears are indeed legitimate.

In our post racial world the police do no think twice about racially profiling a suspect.  Bodies that are considered threatening are often times abused and in the case of Oscar Grant murdered in cold blood.  This can be described as nothing other than an execution.

We teach our children that "officer friendly" is there to protect and serve, we never ask to protect and serve who.  Black lives are cheap and when men that hold hatred in their hearts are given the power to act upon their unearned privilege it often times leads to death.

How many times do we need to see police brutality to come to the determination that they have become nothing more than armed thugs pretending to be acting in the service of law and order?  Today because of the advent of technology we are able to witness some of these acts, but how many times daily are black bodies battered?  If this kind of atrocity can occur publicly with cameras rolling, what occurs in the dark alleys and the forgotten places?

How many bodies sleep in morgues whose violent arrival was predetermined by the colour of their skin?  Whiteness has the nerve to daily speak of fear of dark bodies and the crimes that we commit, conveniently ignoring the ways in which it has continually waged war on all those that it seeks to control.

Racism is not something that ended in the past.  It is not something that Martin Luther King brought to an end with the march on Washington.  It lives like a virus spreading throughout our society, eating bodies of colour as fuel. What whiteness fears is not bodies of colour but our vengeance.  It fears the righteous anger that causes our bodies to shake.  It fears the pain that we experience every time we must burry one of our sons, or daughters.

It sets its racist cops upon us, it creates laws and then applies them with racial bias, it imprisons a whole generation of our youth behind iron bars.  It offers us substandard education, substandard living conditions, ensures that we are employed in jobs that barely provide subsistence and then in the final act of hatred, teaches our children through media, that we are despicable.

To counter act our anger we are chastised with the term reverse racist.  They express fears of "hating whitey" as though that emotion had no basis in the historically cruel treatment of bodies of colour.  I do not accept hatred based in colour but I understand it; whiteness stands before the world as though it is pure in thought and deed.  The blood of our children convicts you.  When Oscar Grant was experiencing his death rattle what were we to feel but rage?

Today the man that executed him is on paid leave.  The videotape that shows his death has been deemed inconclusive.  Whiteness has once again succeeded in reminding us all that simply being black constitutes threat, guilt, and fear.

As I write this I am watching my two young sons play.  They are beautiful and they are my hope.  Tonight when we sit to have dinner I will sit and tell them what happened to Oscar.  I will remind them once again that even though to me they are more precious than the air I breathe, that they must be hypervigilant in their interactions with whiteness.  I will tell them that whatever emotions that they experience are legitimate, but mostly importantly I will remind them that even though the world may see the face of evil when they see them, to me, their mother they are the face of love.