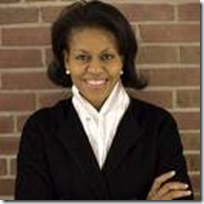 Michelle Obama is an extremely beautiful woman.  There can be no denying that when she enters a room she immediately fills it with her style and grace.  This is one aspect of her being. Michelle is extremely accomplished and this is now being overlooked by the desire of the media to turn her into a fashion plate. As the inauguration draws near, speculation on "the dress" has become daily commentary on most news outlets.  I find it interesting that no one cares what the first black president will be wearing, but his pretty little wife better make sure she has the right outfit for the occasion.

As the future first lady, she is one of the most socially constructed individuals in the United States. When she isn't being called angry, a baby momma, racist, anti-feminist sell out, ape, or unpatriotic, the world is trying to turn her into the next domestic diva.  Michelle like all other first ladies is expected to smile pretty, speak when spoken to, refrain from expressing an opinion, while ensuring that the white house runs smoothly.  We certainly cannot have a foreign head of state find a lump in their oatmeal.

The first lady has a lot of responsibility on a day to day basis, yet it is unpaid labour.   Just like women's work across the globe it is assumed that this is labour that she will be happy to perform for her husband.  Why wouldn't she want to work long hours for four years unpaid, isn't that every woman's dream?  A nominal title does not erase the fact that this is labour exploitation.  At this time we have never had a first husband but on the occasions that a president has been single, a female member of his family has always stepped in to play the role of first lady unpaid. Being the perfect hostess is supposedly a woman's pleasure.

Instead of spending so much time focusing on what she is wearing, perhaps women should be asking the more pertinent question of why she isn't going to be paid for the labour that she will be performing.  We should be making connections between Michelle's unpaid labour and the work that women do in the private sphere daily that maintains the public sphere.

The work done by the first lady is the perfect example of the ways in which women's labour is highly necessary, yet socially devalued by all.  It is not counted in the GDP or GNP; women's labour never factors into any national  budget and yet without someone cooking, cleaning, raising children, and all the other support staff work performed by women, the capitalist mode of exchange would implode.

We are not pointing out larger connections. We are reinforcing the idea that Michelle is nothing more than eye candy by daily focusing on what designer she will be wearing, or talking about her supposed star power.  I don't care if a dress worn by Michelle immediately sells out, what we need to emulate is her ability to think critically about the larger connections.