Racism In The Places We Deny 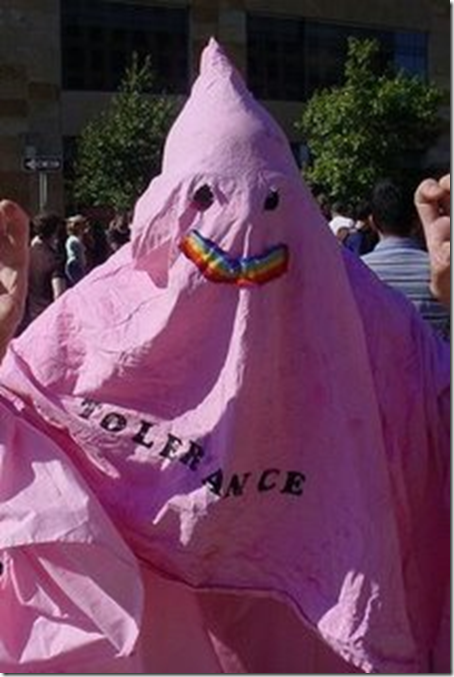 I came across the above photo at Transgriot I found myself returning to it several times because it was disturbing on many levels.  At first I wasn't sure if it was the clear connection to the KKK, the word tolerance written on the sheets, or the rainbow grimace that drew my attention. I have had more than my share of scuffles with GLBT community regarding appropriation and racism.  I have never wavered in my support for gay rights, I simply believe that standing up for social justice should not come at the cost of my dignity as a WOC.

Though I have spoken out against racism in the GLBT community and the feminist community, I really feel that it is necessary to point out that this divide exists in all so-called justice movements.   There is this sense that because someone is necessarily advocating a position that would entitle a group to rights that they have been socially denied, that they are necessarily more progressive than the larger society; but often times these groups simply mirror the larger social world from which they were drawn.  Since blackness moves from issue to issue, this means the ways in race interacts with the all of the isms is an issue that needs to be dealt with.

POC are routinely expected to privilege one part of our identity over our blackness.  Feminism continually reminds us that we are women; and therefore demands that we focus our attention in ways that exclude the various ways in which race makes our existence as feminine in a masculine world that much more difficult.  Woman is understood to be white and when we protest against this definition we are called angry.  The face of the Trans community is very white as well.  The voices of trans women of colour are silenced, even though they face the highest rate of violence within that community.  Many gay and lesbian leaders were quick to blame blacks for passing prop 8 and used it as a platform to display their racism to the world.  In the disability rights movement you will routinely see the white male used as the universal example.

Where does this leave blacks who must engage because we cannot deny that our gender, sexuality, or ability, are necessarily areas of stigmatization that we must fight against?  If we choose to ignore our blackness we would be denying an essential part of our being and upholding the systems that works to create us as second class citizens.  When we don't include race as a critical issue in our drive for justice, it creates many as invisible.   These groups seek equality with the white, straight, able bodied, cisgendered man, of class privilege and by their purposeful erasure of bodies of colour they simply reaffirm the very hierarchy that has caused such a discord of worth and value within our society.

If one is black and a woman, or black and trans, or black and gay, inevitably one will face racism.  Often times before we are even aware that we are gay, female, disabled, or  trans gendered, we know that the blackness of our skin makes us different. Blackness is the first, but not only stigmatization that many of us face. For POC,  justice can never be achieved unless we deal critically with race.

I am tired of watching as these so-called justice movements use us as stepping stones to improve their social positions.   We serve as a great backdrop when a photo is being taken, but our voices are deemed unnecessary to the struggle because our issues involve deconstructing the overvaluation of whiteness.  These social groups know that even though they are marginalized and repressed, whiteness still serves to grant them a certain amount of privilege in this life and when is a target, it can be even more tempting to hold onto that which will on some level mark you as an equal.

To the fauxliberals who want the benefit of black labour without giving us a legitimate  voice in any of these movements, to blacks you are not far removed from the right wing fundies that you fight against.  Whether, or not you hide your racism behind code words or terms like "pulling the race card", the effect on us is the same.  White privilege is white privilege not matter where it comes from. It matters not whether the oppressor is in a wheel chair, or is a pre op transman, if you exist with white privilege and do not make anti-racism an important part of your activism you are not truly committed to equality.  It is not enough to say you want equality without asking the question equality to who and equality to do what.