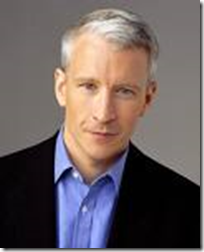 For a large part of the day my television is on CNN.  I have even developed my favourite anchors.  Anderson has become one of my favs...though I am sure he would prefer to be acclaimed for his hard hitting journalism, for me its all about the eyebrows, and his quirky facial expressions.

"Doing an Anderson" has become a colloquial expression around my house, when we need to put on a serious face.  Being as famous as he is and having the genealogy that he does  (yeah rich guy), much time has been spent speculating about his private life.  Who he is sleeping with, and why won't he tell us is quite the obsession.

Some refer to him as he most famous closeted gay man on television.  If he were to announce that he was gay today, many would be as "surprised" as they were when Clay Aiken came out.  I am not writing this post to pry into Andersons business, or make assumptions about who he is bedding, because quite frankly I realize that it is none of my business.

The speculation about his supposed homosexuality really needs to end people. Seriously, we talk about wanting to move beyond a gender binary and yet we spend  massive amounts of time speculating on who is and isn't in the closet.  I know this is dangerous territory for a straight ally to walk down, but I just feel that we are perpetuating the idea of separateness by announcing that one needs to declare what their sexuality is.

The fact that people need to declare themselves gay is a huge part of heterosexist privilege in this world; and therefore we are in fact maintaining that when we demand someone admit their sexuality publicly.  If we truly believe that all love is beautiful and that it does not matter who you sleep with, this push to out people, or force them to be open about their private lives has got to stop.

The idea that someone is living a lie if they don't satisfy our curiosity by announcing to the world that they are gay is ridiculous.  They are leading their lives, you just aren't privy to their business.  Would expect to know if the man had a bowel movement today?  No you would not, and therefore how the man chooses to work out his jones is not your business either.

I have no idea whether or not Anderson is gay.  It makes absolutely zero difference to me.  I watch Anderson 360 because I like the way he engages with people.  We need to stop making someone's sexuality the only defining characteristic of who they are, if we are to arrive at the point where we see them as just people.

While it is great the Maddow is an out lesbian, the praise for being an out lesbian is problematic.  Do we like her because of her sexuality, or because she does awesome work?   Perhaps Anderson just wants to be the best at what he does period, realizing that who he sleeps with has no effect on what he does for CNN.  Perhaps he has just decided that having two lives means that not everything that he does has to be on camera.

We demand a lot from our celebrities.  It seems the moment someone enters the public eye, the scrutiny becomes ever more pressing, until we find out the most minute details of their lives.  I understand the desire to reframe sexuality so that neither gay or straight presents a challenge socially, but publicly speculating on how he handles his business is not going to solve that.  Just enjoy Anderson because he is Anderson, and leave what he does in the sack out of it. If he wants you to know when he gets his groove on, I'm sure you'll know.