When Hyper Masculinity Supports Racism and Sexism In Policing 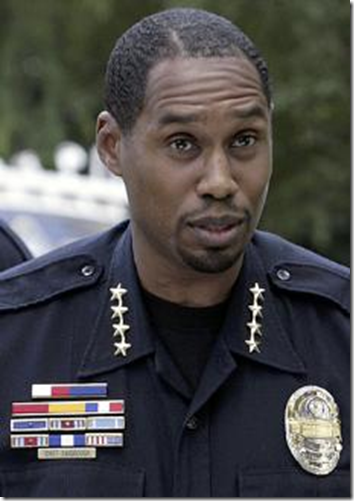 "Women want the dick, even when they say 'no.' They want the dick."  Those are the words of the recently suspended CSU Police Chief Dexter Yarbrough.   The aforementioned commentary not only supports rape it blatantly promotes it.  When people deny that we live in a rape culture, they need look no further than statements like this, by those that we have entrusted to protect us.

According to the Rocky Mountain Collegian, Yarbrough regularly encouraged illegal activity.   As we look at the recent murders of men like Oscar Grant, the danger of condoning this kind of activity becomes readily apparent.

In a later lecture, the chief, who was a Chicago policeman prior to entering academia, said sometimes excessive and violent force against a suspect is a "reality of law enforcement."

"If there's a news conference going on, I can't get in front of a crowd and say. 'He got exactly what the f*** he deserved.' You know the police should have beat him, you know. I used to beat ass when I was in Chicago, too. I can't say that.

"I'd have to say, 'Well, you know we're going to have to look into this matter seriously … all of our officers, we like to think that they operate with the utmost integrity and ethics … All of that sh** sounds good. That sh** sounds real good, but in the back of my mind, damn. He got popped. If he would have done it the way we used to do it in Chi town (Chicago), man, none of this sh** would have happened."

While I am very happy that this man has been suspended, the fact that he was allowed to continue at his job with a $156,000-a-year salary is indicative of the ways in which we tolerate police abuse of power. The job of an officer is to protect us from danger and not act as judge, jury, and executioner.

What is further ironic, is that despite being a black man, he felt that it was necessary to train in this manner; with the full knowledge that it is bodies of colour who are most likely to abused and murdered when they interact with the penal system.  He has so internalized hyper masculinity that he has become blind to the ways in which race and class intersect to make POC especially vulnerable to police violence.  If he were not wearing the uniform, Yarbrough would be confronted with the same tactics that he regularly encouraged in the class room.

His activities serve as evidence as to why it is necessary for us to reject the masters tools.  Though he as an individual may have felt empowered, he was legitimizing the abuse of fellow people of colour and all women.  We must actively seek to confront patriarchy and the ways in which it affirms hyper masculinity because it is ultimately counter productive to a free and safe society.