When Punishment Is Cruel And Unusual

Imagine if you were a woman who was sentenced to prison for a heinous crime and as past of your punishment you learned you would be denied a critical medical procedure.  This is not  unique occurrence it happens across the United States.  Depending on what state you are imprisoned in, you will not have access to either your hormone treatments, or a sex reassignment surgery.

This in my mind constitutes cruel and unusual punishment, as it is forcing someone to live in a body that does not match their gender identity.  Some states will allow an inmate to continue hormone therapy if they were already on it before they were incarcerated, but no state will allow an inmate to initiate therapy. I cannot begin to imagine the trauma of watching as your once feminized body begins to reshape itself:  breasts would disappear, facial hair would return, and the fat would begin to redistribute.  The person that you are would literally disappear before your eyes. 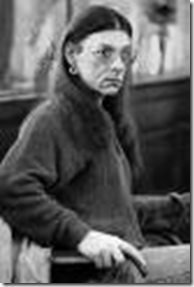 Michelle Kosilek fought for the right to continue her hormone therapy in prison and was successful in 2002.  Judge Judge Mark Wolf ruled that she had a legitimate medical condition that needed to be treated.

This decision has been met with a lot of ire.

Brown points out that most private health insurers do not cover sex-change operations, and says taxpayers should not have to pay for such "elective" surgery for inmates."

This denial of rights has caused undue emotional harm to many inmates.  This week the Boston Herald reported that a cross dressing dermatologist took hir life.   Kosilek has said that she feels distressed, "every waking moment".  Kosilek has already attempted suicide twice.  For her sex reassignment surgery is a necessity.

In Colorado, inmate Kitty Grey, who is serving 16 years to life for molesting an 8-year-old girl, is suing the state to provide her with a gender specialist she hopes will determine that she needs a sex-change operation. The state Department of Corrections is already giving Grey female hormones.

"For all intents and purposes, I am a woman in a man's prison," Grey told the Denver Post in an interview earlier this year. "That's like putting a cat in a dog kennel," Grey said.

Colorado officials say that providing a sex-change operation for Grey or any of the other two dozen transgendered inmates in the state's prisons would create security concerns.

Those who are advocating against funding the necessary medical procedure and or medication always site undue expense, moral condemnation, or the inability to provide a secure environment for prisoners undergoing treatment.

Dr. James Michaud, chief of mental health for the Colorado prison system, said he does not believe sex-change operations are medically necessary.

“There are certainly people who are transgender who want surgery and who want to appear different, but I don’t think that makes it medically necessary,” he said.

“It’s the most absurd thing I’ve ever heard of,” said Wisconsin state Rep. Mark Gundrum, who helped write a state law that bars the Department of Correction from using tax dollars for hormone therapy or sex-reassignment surgery.

He said the framers of the Constitution “were envisioning preventing people from being burned in oil or burned at the stake,” not simply refusing to use taxpayer dollars for inmate sex changes or breast implants.

As I was reading articles to write this post, I noticed that the wrong pronoun was repeatedly used.  News agencies also had no issue with using the former name of the people in question.  It seems that to many, these inmates are not worthy of even the smallest modicum of respect.

This issue is complicated by our general disregard for those who are in prison as well as our rampant transphobia.  There are many who believe that prisoners should be granted only the barest of survival necessities; and therefore view hormone therapy and sex reassignment surgery as an unnecessary expense.  There are also those who despite compelling medical evidence refuse to understand that someone who is trans gender needs to be able to express the gender that their body is not reflective of.

Not all people who are trans gender need or want sex reassignment surgery and or hormone therapy, but for some it is an absolute necessity for them to be able to be a functioning human being.  We have forgotten that prison is also about rehabilitation as well punishment.  What kind of message are we sending these inmates if we cannot validate their humanity enough to give them the medical treatment that they need?  We would not deny someone cancer treatment (note: I am not calling a trans gender identity a disease) or medication to control blood pressure; and therefore we should not deny someone hormone therapy, or a sex reassignment surgery if that is what is needed.

In many cases transphobia is directly responsible for these individuals ending up in prison in the first place.  Many find themselves unemployed because they have no employment protection and are therefore forced to find other means to maintain subsistence.  While not all individuals become criminals, it is fair to state that the cisgendered community, along with our capitalist economy creates the conditions that force some to turn to crime.  It seems to me, that it is a terrible miscarriage of justice to further punish these individuals by housing them in prisons that do not match their gender identity and then deny them the medical treatment that they need.

I know that this post is a little bit awkward, but my intent is to affirm the rights of trans gendered peoples to receive the treatment that they require and to help raise awareness to the ways in which transphobia is damaging.  All people matter regardless of their gender identity, or what crime they have committed. Each and every single one of us is filled with potential and if we could simply learn to reconsider how we value people, this world would be filled with less crime and a lot more humanity.