When Religion Justifies Raping and Beating Your Wife 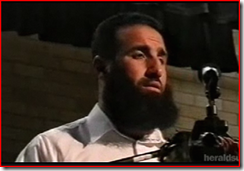 Coburg's self-styled cleric Samir Abu Hamza has used his twisted version of Islam to  support the right of a man to beat and rape his wife.  This is not the first such declaration that we have heard  from so-called men of God.   These so-called holy men use religion to justify their misogyny and in turn preach a message of hate to young impressionable men, who have already been indoctrinated in a culture (western)  that teaches them that women's bodies are ultimately always available.

"In this country if the husband wants to sleep with his wife and she does not want to and she hasn't got a sickness or whatever, there is nothing wrong with her she just does not feel like it, and he ends up sleeping with her by force ... it is known to be as rape," Mr Hamza said.
"Amazing, how can a person rape his wife?"

How can a man who has sworn to love for life rape his wife?  Rape is not an act of love; it is an act of patriarchy, power, and violence.  Though Samir Abu Hamza  uses religion as justification, men have used all forms of reasoning to legitimate their violence against women.

Steven Tyler of Areosmith claims never to have been rejected by a woman.

When asked in an interview in Elle magazine if he was ever rejected by a woman, Tyler replies, "Never. I'm a persistent motherf**ker. I'm very sensual and very rhythm-oriented and into poetry. Women can feel that."

This is yet another example of the fact that a woman's consent is often not deemed necessary.  In this case, Tyler falls back on his so-called Casanova persona to justify not accepting that no means no.

Late last fall I blogged about a man who routinely raped his wife and considered it marital sex.  She was unconscious and therefore was unable to consent, making any kind of sexual relationship between them rape.  The fact that she at one time presumably consented to such a relationship, was understood as perpetual consent ,rather than a potential violation of her person.

As westerners, we have a tendency to look at Islam and point to the ways in which it is sexist and patriarchal, without admitting that these same forces exist within western culture.  It is far easier to point a finger "at those" people, than admit that systems like patriarchy and sexism span the globe equally.  Whether it is Melbourne, Uganda, or New York, if you are woman, there is always the potential of rape.  We are raised with this knowledge and in time attempt to adapt our behaviour in such a way as to avoid rape.  The sad reality is that a woman's behaviour is irrelevant if a man has the intent of rape.  No matter what precautions we take, or how we dress, if a man has rape on his mind every woman he sees or interacts with is a potential victim.

While it is most definitely necessary to call out men like Samir Abu Hamza, we should do so with the knowledge that though religion is his justification, he is no different than any other rape apologist.  Men don't rape because of religion, they rape to express power over women.  Religion is just one amongst many that patriarchy uses to oppress women.   We need to oppose the patriarchal domination of men by women, in all forms if we hope to end rape.  Only recognizing a rape culture when it is another ethnicity, or religion, does nothing to dismantle patriarchy.

We need to see to take positive steps like feminist parenting of both boys and girls, critiquing the media images that our children see, lobby schools to teach a feminist curriculum,  demanding that governments acknowledge the pink ghetto, and take steps to provide economic opportunities for women.  The only way to destabilize patriarchy and end our rape culture is to empower women in every single sphere of life.  From education, to economics, to politics, to science, women must become leaders.  We must be seen as equal beings  that exist with equal social power to men, if we are to end our rape culture. If we agree that rape is about power then the best way to fight it is with equal power.