Today I popped over to Racialicious and was confronted with the following. 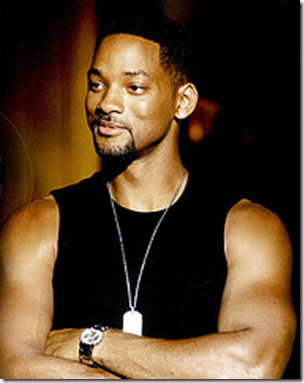 It was as if some part of me was validated [after Obama won the election.] It was something that I’ve known for a long time that I couldn’t really say: ‘You know guys, I really don’t think America is a racist nation.’ I know that I feel like that sometimes but I just don’t believe that. There are racist people who live there but I don’t think America as a whole is a racist nation. Before Obama won the presidency I wasn’t allowed to say that out loud because people would say: ‘Oh yeah, of course for you, Mr Hollywood!’ ”

Quoted in the Daily Express

I will start off by giving Smith his due, and admit that he is  most definitely Hollywood gold.  Today when one thinks of a box office smash, Will Smith is the first name that comes to mind.  When we look at Will Smith though he is a black man, his fame and class privilege have allowed him to transcend many of the negative social stereotypes that are often associated with black masculinity.

The near invisibility of his colour has definitely been a highly managed phenomenon. Smith took the Bill Cosby path to fame. With the exception of his role on Fresh Prince of Bell Air and as Ali, he has specialized in what I refer to as "every man roles" i.e acting in movies in which there is little to no commentary on the blackness of his skin. Is it really any wonder that he believed in the post racial myth even before the election of the Obama?

His body of work does not include any reference to the ways in which blackness is still a problematized identity in this society; in fact it serves more as stabilization of whiteness, in that it supports the idea that we do not live in a society that is extremely divided along race and class lines.

Will Smith can afford to take the position that there are only racist people because the chances that he will end up like Oscar Grant are slim.  Should he get pulled over for running a light, he will mostly likely be asked for his autograph instead of staring down the barrel of a gun.  His class privilege and fame can completely allow him to ignore the ways in which being a black man constitutes marginalization and exploitation in this society.

Clearly the man has been indoctrinated.  America is a racist, patriarchal, sexist, abelist, homophobic, capitalist state, and only those that exist with privilege are able to deny the reality of this situation.  Even if we  took  the incidents of racial conflict individually, how do we avoid the question of how these people came to their belief system?  We are not tiny little islands, we are interdependent and highly social beings.

Will Smith wants the world to view him as just a man and to a large degree he has been successful; however even his hero Obama cannot escape his blackness as president of the United States.  To maintain his Cosby path to celebrity, Smith cannot afford to admit the degree to which America is racialized.  The moment he reminds his fans of the obviousness of his being, he will remind them of their unearned privileges.

Whiteness needs content blacks like Smith,  blacks that will not openly challenge the status quo in exchange for receiving some of the benefits of whiteness; thus supporting the lie that we have transgressed the racial divide.  The Will Smiths and the Oprah Winfreys end up being used as tools by people of race and class privilege in that they are held up as examples of inclusivuty and meritocracy.  If the accomplishments of the aforementioned were readily available to all, rather than just a freak phenomenon, they could stand as proof of change, but the fact remains that for most POC the lifestyle lead by Smith is unreachable.

Just as Smith needs whiteness to maintain his celebrity, whiteness needs Smith to maintain its mendacious spin on the facts.  It would not be in his best interest to face the truth of the ways in which the system that he claims is so colour blind manipulates his success to its advantage.   Blacks that challenge racism are not revered, we are considered angry malcontents.  The refusal to sup from the masters plate is considered a betrayal.  Whiteness wants gratitude for the table scraps not a challenge to its authority.

If Will were to begin critiquing social imbalance he would be dumped in a New York minute and it is this awareness that encourages him to live in denial that the true cost of his elevation his loss of connection with the lived experience of blacks across the United States.  Obama may be president and Will may be the biggest star in Hollywood, but the US still functions like a neo apartheid state with people of colour waiting for a stamp on their passbook.

Editors note: This post is dedicated to D whom I love very much, but will forever be wrong about this and many other things.  I will try and get to the ATM post sometime in the near future ;)