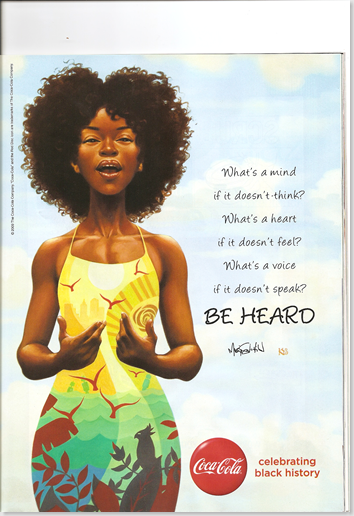 I found this lovely little ad in this months issue of Ebony.  Why should black history month be any different than any other public celebration?  That's right, commodify the shit out of it and then pretend that we seriously value it.  We certainly shouldn't be taking the time to educate children about the struggles of their ancestors through conversation, or even visit sites that are important in African Diaspora history, when we can conveniently purchase something to prove that we are culturally aware. What better way to celebrate your culture and your history than to down a coke?

In case you were wondering, you can pick up that case of over sweetened, teeth rotting pop at Walmart, while you buy your blacksploitation flicks.

It seems that there is no need to promote black businesses that are increasingly suffering in this tough economy.  Why should we even bother to attempt to buy black during black history month, when the white owned Walmart has soooo conveniently packaged what is supposed to represent our culture?

We can just ignore all of the poor workers of colour that are being underpaid and exploited, as we stroll pass the greeters with huge smiles on our faces.  Don't stop and think for one moment about the fact that most black owned businesses are small and that Walmart  makes a concerted effort to bring about the closure of every single mom and pop business the minute it opens up a new store. Let's pretend that the opening up of a Walmart does not immediately drive down the price of commercial property, thus making it nearly impossible for small business owners to even sell what is left of their businesses at a reasonable rate.

I am particularly disgusted to find this ad in a supposedly black magazine.  I understand that just like any other industry publishing is a business however, is it necessary to take an event that supposedly celebrates our culture and allow it to be cheapened for the sake of a dollar?  Could the same thing not have been accomplished by seeking out advertising from black owned businesses?

This is yet another reason to end our so-called celebration of black history month.  Ads like this only further prove the point that this is a cheap additive, instead of encouraging a legitimate discussion of the ways in which the peoples of the African Diaspora have contributed to Western society.  March 1st this little display will be taken down and Blacks will go back to their regular position of being followed around the store as they purchase their cheap items made from the slave labour of poor third world bodies.

You cannot celebrate achievement with more exploitation.  What does it say that the descendants of slaves believe that it is okay to promote purchasing from a company that has no problem participating in neo-colonialism and economic exploitation to maintain ridiculously high profits? Walmart does not give a shit about POC.  The only thing that this corporation gives  a damn about is making sure that it continues to be the largest employer in North America and maintaining its profit margin. If we must participate in this charade can we not at least attempt to pretend that we support each other by promoting black owned and run companies?