Ruth is a 30-something mother from just outside of Liverpool, UK. She regularly blogs over at Mothers for Women's Lib and keeps her own personal blog, Look Left of the Pleiades.

Everyone's been talking about it. Periods, PMT/PMS, sanitary protection....

So I'm weighing in.

My experience of periods, pmt/s and sanitary protection. And being a hippy.

I remember in Fourth Year Juniors (now known as year six, I think) all the boys going to an assembly while us girls sat in the classroom being given a talk by the lady from Tampax, about what was going to happen. We all got given a lovely pink plastic case, looked like a pencil case, but in fact was for discreetly carrying tampons (tampax, of course).

The sanitary protection adverts when I was growing up were like this one: 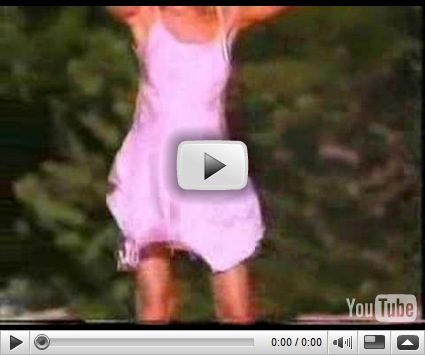 Or they had women on skates in leotards drifting over beaches, or doing other physical activity. Tied in nicely with what our PE teacher told us in first year seniors (along with "horses sweat, men perspire, and ladies glow") which was that the best cure for PMT, both the physical symptoms and the emotional ones was... to get out of the house and go for a jolly good run! No mention of the actual - you know - blood, itself. It was all tied up in euphemisms and metaphor. It was a bit "you know what I'm talking about here, ladies".

And yet my experience didn't quite tally up with the adverts, or the PE teacher's suggestion, or the nice pretty pink boxes. I hated my period. Not so much the pains, or the emotional side. That passed me by, when I was younger, to some extent. But the mess! I hated the mess! It felt disgusting, embarrassing and wrong.

Once (I was bullied a lot in school - whole other story) the girls in the PE changing room stole my tampons, and knickers. No one would admit to it. I bled down my legs the entire afternoon, too embarrassed to ask a teacher for a spare tampon. I went to the toilet and mopped up the blood. I felt shameful. I could see and smell the blood through my dark blue culottes. My Mum picked me up from school that day in her car - I can't remember why, I normally walked home - and I was in hysterics. I stood sobbing in the shower, washing away the blood. I was about 14.

And yet, from that moment on, I decided it was time for a change. It was about this same time I started getting really interested in feminism. Of course, like just about everyone else, I have huge problems with Germaine Greer these days, but back then, the idea that true liberation lay in tasting your own menstrual blood held great appeal for me. I don't remember any specifics, but I recall, somewhere, a hazy idea that I would never be as embarrassed by my period ever again.

I don't know why I had this idea, but I also decided that I would start colouring my hair with red once a month. My hair at the time was a dark-ish blonde (no idea what colour it is naturally, now) and with Wella Shaders, I started to put wash-in / wash-out red, once every month, at period time.

Fast forward another ten years and I bought myself a Mooncup. I adored it, and would still be using one if birth problems hadn't knackered my pelvic floor. (I now use washable pads.) I used to pour the blood from the mooncup into a jug, add water, and use it to water the plants. (Now I use the water from the jug in which I've soaked the pads.) I felt like I was "offering" something of myself back to the earth - again, more hippy stuff, I suppose. I pour it mainly on the cherry blossom tree under which is planted the placenta from my son's birth.

I had a very brief stint on the contraceptive pill in the early noughties. I was only on it for about six months, but it sent me mad. Mad as in angry, mainly, but also mentally ill. I remember one particular incident involving raw chicken, piss and a hammer. Best not to ask. It also drastically lowered my libido. I came off it in favour of condoms and the madness left me, but I don't think my libido's ever completely recovered. Why am I digressing? Because the pill regulated my periods. I bled a lot more lightly. I didn't get any physical pain. But the slight relief from that was not worth all the emotional pain.

Of course, when I was pregnant, I didn't have a period. I remember my period should have come at the middle/end of July, 2006, and was a few days late. Then a week late. Then another few days. I didn't believe I was pregnant though (although we had been ttc) because I had cramps like period pains, and felt emotional as per usual. But the period got later and later, and eventually I took a pregnancy test which was positive (the pain had been implantation cramps).

And then I didn't have a period again for a long time. Pregnancy, and frequent breastfeeding, saw to that. When I returned to paid work in January 2008 I had a warning bleed, for half a day (less frequent breastfeeding). My body was telling me I could no longer rely on lactational amenorrhea as a form of contraception. But I didn't have an all-guns-blazing full clear out period until I stopped pumping and went to morning, evening and night-time breastfeeding only, in April 2008. That particular period went on for over a week, like my body was making up for lost time.

But the funny thing is, I wasn't sorry. I wasn't upset to have my periods back. In fact, I was over the moon (lunar connotations intended)! Because my body never ceases to fascinate me. It produces hormones that ebb and flow with the pull of the moon, like the tide. Every month, once a month, I feel angry; I want to rage at the world; I want to scream like a harpy at all the injustices meted out against my gender. Is this anger somehow unjustified because it is hormonally driven? Is this once-monthly rage the exception, and the rest of the time is "normal"? Or is this the real me, peering out, just for a short while?

It's when I feel at my most powerful - and at the same time my most vulnerable. I say things I don't mean (or do I?) that have the propensity to wreck friendships and relationships. I lash out. I feel out of control - but at the same time, like a force of nature.

And... a secret now... I do not mind the pain any more. In fact there is part of me that quite relishes it. Some masochistic thing in me, perhaps. But the truth is, it reminds me of the pain of my labour with my child. And yet my labour was a medically induced, high intervention affair. It was something that was done to me, not something I had any possession of. This is something that comes from within me. My body has made this happen, and I control it.

I used to take Starflower oil (like Evening Primrose oil, but a lot more gamma-linolenic acid for your money) around period time. It calmed me a little and even eased away some of the pain. I can't recommend it enough, if you want to take that route. But ... I don't any more. I have tasted my own menstrual blood and my own menstrual power. And I don't want to go back.

I said I was going to talk about "being a hippy". It seems to me there are two almost opposing views within feminism sometimes. Being overly simplistic, one is the "embrace your 'femaleness'" culture, which celebrates women as powerful beings and proto-goddesses - when they don't deny their own bodies, that is. So, natural births, natural periods, that kind of thing. So far so good, I suppose but the problem is it becomes tied up with this whole "woman = nature" thing. Women is nature, is green land ready to be ploughed and fertilised, is powerful only in her ability to be impregnated or tamed by man, likes ribbons and kittens (okay, I made that last bit up). Whereas man is explorer, is hero, is conqueror, is civilisation... and you start to see the problem.

And the other side to that coin is the "don't be controlled by your 'femaleness'" culture. Control your periods or cut them out all together with technology, have strong pain relief during labour, etc. Again, fair enough. But the problem with this side is that, either, it can quickly become "hate everything that has been traditionally gendered female". So, hate motherhood, hate breastfeeding, hate all children, hate sewing and bunnies. (Well, okay, maybe not bunnies.) Or, it ties into the "hide your true 'femaleness' and show a male-defined femininity" culture of waxing, shaving, toning, tanning endorsed by the mainstream.

To some extent, until the ways in which we define ourselves become generally accepted, we do have to fit into other people's definitions sometimes. And if I only have these three options to choose from, I would choose the first. I suppose - to my mind - it's the best of a bad job.

But I'd rather have the ability to define my own femininity, thanks very much. I mean, I don't want to be a Goddess when it comes at the expense of being conquered by the Explorer-man: I enjoy my periods but I don't want to be the one who does all the other "nurture" stuff like changing every single nappy and always being the one who gets up at five a.m. with the baby.

I was going to write the caring for the environment, and reducing or making easier traditionally "female" tasks and the problems involved in reconciling both (focusing in particular on reusable sanitary protection). But I think that's a post for another day. I'm tired... I'm due on, remember?