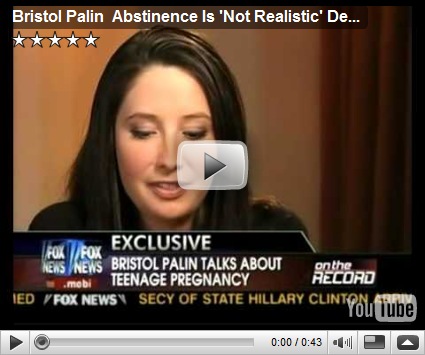 In an interview with Greta Van Sustren we finally get to here from Bristol instead of having her thoughts “translated” through her mothers PR people.

Greta: I don’t want to pry to personally but obviously contraception is an issue here.  Is that something that you were just lazy about or not interested in, or do you have a philosophical or religious opposition to it or?

Bristol Palin is the poster child for why abstinence only education does not work.  By preaching this highly unrealistic plan to our children we are setting them up for not only teen pregnancy, but sexually transmitted diseases.  In communities of colour where the transmission rates are extremely high, this amounts to a death sentence.

While abstinence may be the surest way to prevent unplanned pregnancy and sexually transmitted diseases, it flies in the face of the fact that as human we are sexual beings.  Children who go through abstinence education, end up having sex at the same rate as those who learn responsible sex education, with the difference being that they usually fail to plan and end up engaging in unsafe sex practices.

I started discussing sex with my oldest child in terms that he could understand when he was three years old.  He knows everything from conception to birth to abortion to contraception.  There is no question that he has ever asked that I have failed to answer honestly, or to the best of my ability.  These programs often tell children lies about sex and reproduction and this misinformation is highly deceitful and breaks down the lines of communication.

For the cost of a condom Bristols life could have been very different today and though she is a child of privilege, being a single mother at her age will greatly impact her ability to achieve her goals and dreams.  It is time we face the facts, teenagers have sex.  We may not like it and we may not approve but that is not suddenly going to turn them into asexual beings.  As adults we should be  offering as much information as they can intake; thus ensuring that they are not making decisions out of blind ignorance or embarrassment.

I have said quite openly that when my child turns 12, I will buy his first box of condoms for him, with the understanding that I don’t want him participating in sex however; if he must act against my wishes I want him to be safe.  I would much rather him have safe sex than to bury him at an early age because he has contracted HIV/AIDS.  I love him enough to understand that my moral position on teenagers engaging in sex is not worth his life.   Should any of you find that to be to early, remember that a 13 year old boy just became a father.

Everything that Bristol was taught was the complete opposite of her lived experience.  We live in a society when children are exposed to sex and sexuality at an early age.  It is everywhere they turn and then we tell them not to engage in sex.  What kind of conflicting message is this?  To compound upon this hypocrisy by not fully arming them with the knowledge that they need to make responsible decisions, is an abdication of our responsibility as adults.

I am glad that Bristol has been able to step out of her mothers shadow to be able to express her true feelings on this issue.  For far to long she has been held up as the  poster girl of the pro life movement, without any real discussion about the reasons why she became a pregnant teen in the first place.