Michelle Bernard: Colluder Of the Week 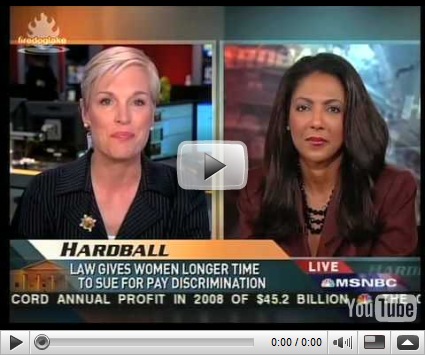 The following is a small bit of commentary from Michelle Bernard on the  Ledbetter act.

..The case was overturned on the supreme court on a technicality.  Instead of being able to bring forced to bring a lawsuit that alleges discrimination within 180 day women now have a longer period of time to do that .  The problem with the legislation that was signed yesterday, is that we don’t know what  the unintended consequences are going to be.  Number 1 it tells women that you are a victim.  Number 2 we don’t know what the burdens are going to be that are going to be put on employers.   Maybe they will say that I should higher fewer women in the work place because they night sue me 20- 40 years from now.  Insurance is going to go up. What is the negative impact that this could possibly have on women?  For that reason the Independent Womens forum does not think that this is a great day in America for women.

The consequence for women is that for the first time in history we have legal protection to ensure that we are all equally paid.   Bernard is a colluder with a capital C.  How she could get on national television and argue that an act that is clearly empowering, turns women into victims is a failure of logic of EPIC PROPORTIONS.    Forcing companies to recognize that women are the equal of men and that they cannot illegally profit due to sexism can only possibly enhance the status of women.

As I listened to her drone on in defence of patriarchy, I kept wondering when the punch line would arrive.  Surely this would all be revealed to be some tasteless joke but apparently Ms.Bernard is quite serious about her assertions.

As I have repeatedly said, patriarchy continues to be a major force in our society in part because of the efforts of women.  Just like any other institution it is beholden to our labour.  Clearly when colluders like Bernard try to construct equality as a negative they are working on behalf of patriarchy.  By attacking the Ledbetter Act she is taking a stance that would lead to the continued impoverishment of women.    We already exist in  a pink labour ghetto and apparently for Ms.Bernard the relevance to this and the worldwide devaluation of womens labour is irrelevant. Certain jobs are paid less not because they are not highly necessary to a functioning society but because they are largely performed by women.

Colluders like Ms.Bernard are so concerned with advancing themselves that aligning themselves with patriarchy is deemed unproblematic.  The millions of women that they throw under the bus with their thoughtless, mendacious, and callous behaviour, cry out from under the yolk of oppression, only to be silenced in an effort to attain a false social relevance.  Men don’t respect women that speak out against womens rights because they recognize the deception in their statements.  What they do rightfully recognize is a tool that can be used to further male hegemony.  I do believe it is time for you to turn in your vagina Ms.Bernard, you certainly are not worthy to be in possession of one and do harm to us all when you claim to speak on behalf of women.

H/T black girl blogging (BTW this is an awesome blog)