The Strong Black Woman Is Dead 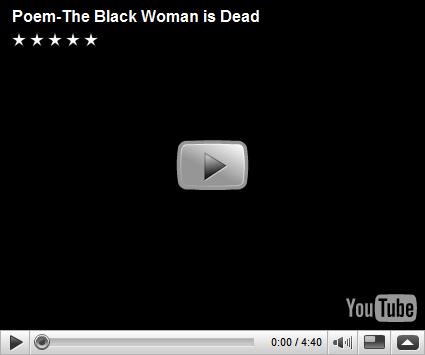 Original poem by Laini Mataka is below the fold.

The Strong Black Woman is Dead

while struggling with the reality

of being a human instead of a myth,

the strong black woman passed away.

but those who knew her know she died

from being silent when she should have been screaming,

milling when she should have been raging,

from being sick and not wanting anyone to know

She died from an overdose

of other people clinging to her

when she didn't even have energy for herself.

She died from loving men who didn't love themselves

and could only offer her a crippled reflection.

She died from raising children alone

and for not being able to do a complete job.

She died from the lies her grandmother

She died from being sexually abused as a child

and having to take that truth

everywhere she went every day of her life,

exchanging the humiliation for guilt and back again.

She died from being battered

by someone who claimed to love her

and she allowed the battering to go on

to show she loved him too.

She died from asphyxiation,

coughing up blood from secrets

she kept trying to burn away

instead of allowing herself

the kind of nervous breakdown she was entitled to,

but only white girls could afford.

She died from being responsible,

because she was the last rung on the ladder

and there was no one under her she could dump on.

The strong black woman is dead.

She died from the multiple births

of children she never really wanted

but was forced to have

by the strangling morality of those around her.

She died from being a mother at 15

She died from being dragged down

and sat upon by UN-evolved women posing as sisters.

She died from pretending

the life she was living

was a Kodak moment instead of a 20th century,

She died from tolerating Mr. Pitiful,

just to have a man and the house.

She died from lack of orgasms

because she never learned

what made her body happy

and no one took the time to teach her

and sometimes, when she found arms

that were tender, she died

because they belonged to the same gender.

She died from sacrificing herself

for everybody and everything

when what she really wanted to do

was be a singer, a dancer, or some magnificent other.

She died from lies of omission

because she didn't want

to bring the black man down.

She died from race memories

of being snatched and raped

and bred and snatched and

whipped and snatched and worked to death.

She died from tributes

who should have been matching

her efforts instead of

She died from myths

that would not allow her

to show weakness without

being chastised by the lazy and hazy.

She died from hiding her real feelings

until they became hard

and bitter enough to invade

She died from always lifting something

from heavy boxes to refrigerators.

The strong black woman is dead.

She died from the punishments

received from being honest

She died from being called a bitch

a dyke for being assertive

and a whore for picking her own lovers.

She died from never being enough

of what men wanted,

or being too much for the men she wanted.

She died from being too black

and died again for not being black enough.

She died from castration

every time somebody thought

of her as only a woman,

She died from being misinformed

about her mind, her body

and the extent of her royal capabilities.

She died from knees pressed too close together

because respect was never part

of the foreplay that was being shoved at her.

She died from loneliness in birthing rooms

and aloneness in abortion centers.

She died of shock in courtrooms

where she sat, alone,

watching her children being legally lynched.

She died in bathrooms

with her veins busting open

with self-hatred and neglect.

She died in her mind,

while her body was carted away

and stashed in a human warehouse

for the spiritually mutilated.

And sometimes when she refused to die,

when she just refused to give in

she was killed by the lethal images

Sometimes, she was stomped to death

by racism and sexism, executed

while she carried the family in her belly,

the community on her head,

and the race on her back!

Or is she still alive and kicking?

I know I am still here.