Watermelons At The Whitehouse And Republican Racism 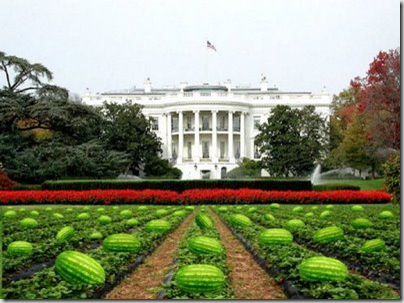 Dean Grose the Mayor of Los Alamitos sent out an e-mail entitled No Easter Egg Hunt At The White House This Year.   Yep us coloured folk sure do loves us some watermelon.  I am surprised he didn’t have chickens running through the watermelon patch to complete the picture. This story might never have been made public had the e-mail not been received by Keyanus Price.  She was rightfully offended and demanded a public apology.

"I have had plenty of my share of chicken and watermelon and all those kinds of jokes," Price told The Associated Press. "I honestly don't even understand where he was coming from, sending this to me. As a black person receiving something like this from the city-freakin'-mayor—come on."

Beyond just the offense of sending this piece of racist garbage to a black woman, what was an elected official doing creating this racist piece of trash in the first place?  Isn’t it nice that we live in this wonderful post racial world where people can be demeaned on a daily basis so that whiteness can continue in its hegemony?

Of course Grose didn’t intend to offend.  How was he to know that putting watermelons on the white house lawn could possible be offensive to blacks?  That poor, poor man.  In his emailed apology according to Mecury News he pleaded ignorance of the racialized nature of his offence.

"Bottom line is, we laugh at things and I didn't see this in the same light that she did," Grose told the AP. "I'm sorry. It wasn't sent to offend her personally—or anyone—from the standpoint of the African-American race."

I suppose we are to believe that it was just accidental that he chose watermelons instead of say pumpkins on the lawn.  It just happened to coincide with the election of the first black president.  Anyone have swampland for sale because this man is clearly pitching bullshit?  If he didn’t know of the racist connection of African Americans and watermelons why did he choose to create this e-mail in the first place?

I am tired of white people continually being racist and making half hearted apologies after the fact.  If he was man enough to send the e-mail, he should have been man enough to own up to the racist nature of what he did.  It is only after his racism was made public that he had a  moments pause.   When I have said that blacks are more than aware of the conversations white people have in regard to race when there is not a POC present I was called paranoid.  Had he not messed up and sent this to a black women, his white associates would have been more than happy to dismiss this and make no public commentary about it.  This is exactly how racism is maintained.  People need to know in every single circumstance that racism is not tolerated.  If you allow someone to say or do something racist in your presence and you say nothing  even if you are in disagreement with their actions, you have just validated their bigotry and acted as a cog to maintain our racialized hierarchy.  Racism can never be brought to an end until all people seek to root it out equally.

Update:  You can e-mail Grose directly at [email protected] to let him know what you think of his little watermelon on the white house lawn picture.