Why You Should Know The Name Billey Joe Johnson

T. Love is a Feminist Person of color and cofounder of the Radical Caring Network and the Peace Communities Progressive Online Community and SaveThePoorBrownChildren.org, a  Feminist Community Blog.  T has given workshops on Civil Disobedience and Indigenous Lifestyles Beyond Patriarchy at Z Media Institute, the Annual A World Beyond Capitalism Conference, National Conference on Organized Resistance and the Gesundheit Institute's Healthcare Justice Gathering among many other conferences worldwide and believes that love and action can create a better world. 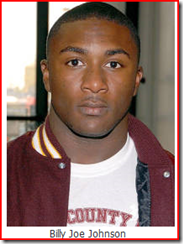 On December 8th, 17-year-old Billey Joe Johnson died from a gunshot wound to the head. Police say he killed himself with a shotgun after being stopped for a simple traffic violation in Lucedale, Mississippi.[1] Several things seem to cast doubt on the official story, including an independent investigation that concluded it would have been impossible for the shot that killed Johnson to have been self-inflicted.

Many on the ground smell a murder and a cover-up. We don't have all the answers, but it's clear that in the racially divided town of Lucedale, all the ingredients exist for a miscarriage of justice.

I've joined ColorOfChange.org in demanding answers and justice for Billey Joe's family. Together, we can help ensure that the District Attorney feels the presence of a national spotlight, and let him know that anything short of a thorough investigation will result in massive attention and a call for outside intervention.

Please join me. It takes only a moment:

From the beginning, the District Attorney has treated the investigation of Billey Joe's death as a suicide or the result of an accidental self-inflicted injury. Based on his public statements and interactions with Billey Joe's family, it appears that the District Attorney hasn't looked into whether Billey Joe was killed by an officer or someone else. Again, we don't have all the answers, but here's what we do know:

- Billey Joe was at his former girlfriend's house minutes before the killing.[2] He never entered the house, but police were called to respond to an attempted burglary there.[3] This fact was not a part of the original story given by the police.

- Billey Joe's family say that his ex-girlfriend had been staying at her father's house because her mother threw her out for dating Billey Joe (she is White and Billey Joe was Black). They said Billey Joe knew to only go to the house when the girl's father was not present, that the two of them were on good terms even after he had broken up with her, and that the breakup was largely because of pressure from her father. The family also claims that there is a relationship between the officer present at the scene of Billey Joe's death and the girl's father.

- A witness heard two shots, not one, at the scene where Billey Joe died, according to an independent investigation launched by the Mississippi NAACP. The pathologist in that investigation has indicated that it would be impossible for a bullet from a a self-inflicted shot to enter in the manner that it did. He also said that given the length of Billey Joe's arms and the length of the shotgun, it would have been impossible for him to hold the weapon and fire it at himself.

- Billey Joe was a star athlete with scholarship offers from more than half a dozen schools. No one--including family, friends, and coaches--could think of a reason that Billey Joe would want to end his life.[4,5,6]

A true investigation would sort out fact from rumour. But we can't be sure that Johnson's family will get the investigation it deserves. In the case of the Jena 6 we saw a District Attorney and a judge incapable of carrying out justice in a racially charged environment. In the recent case of the murder of Oscar Grant by police (and many like it), we see how unlikely it is for District Attorneys to do their job when the suspect is an officer of the law. But in both these cases, public pressure has made all the difference by shining a spotlight on local authorities.

In the case of Billey Joe Johnson, we're looking for the truth and for justice. A minute of your time can help ensure his family gets both: