ABC's What Would You Do: Homophobia In A Sports Bar In New Jersey 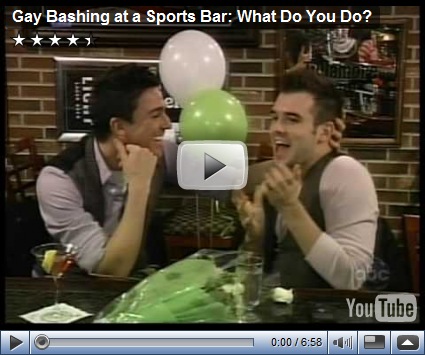 Overwhelmingly, the real patrons showed intolerance for snide remarks like his, even as the gay couple escalated their touching and affection.

“I would rather have 12 of you than four of him,” said one man apologetically to the couple.

“Seriously, this is not your [expletive] bar!” yelled an emotional woman to one harasser, in defense of the gay couple.

Later, a real patron who did harass the couple seemed to retract his views after the hidden cameras were revealed. An expert interviewed by ABC News attributed his transformation to the surprising peer pressure to be tolerant.

“Tolerance has become an American value,” she said. “People work hard to give others the impression that they believe similarly, even when they don’t.”

What I found most upsetting is that even the people that chose to speak on behalf of the gay couples right to be in the bar, clearly displayed heterosexist privilege.  They were fine with the couple being there as long as they were not “overly affectionate”.  You will note that the same standard of behaviour is not applied to the straight couple that were feeding each other and exchanging kisses in public.  This is not a sign of tolerance and acceptance at all.  The woman who got so upset that she left the bar exclaimed that she loved gay guys.  What the hell is that?  That sounds like some kind of fetish thing if you ask me. How about you support the rights of gays and lesbians to share our space free of violence, and harassment because they are human beings and entitled to dignity just like everyone else.

What this video shows us is not how far we have come towards creating an equal society, but how far we still have to go.   There are many neighbourhoods in which affection between gays and lesbians can lead to death. Driving a car with a rainbow sticker can lead to vandalism.  How many instances of women  being raped simply because they are a lesbian, or men asserting that they can rape a woman straight, do we need to learn about to declare that homophobia and lesbophobia is a virulent cancer in our society? There are precious few spaces that are safe spaces for gays and lesbians.

Heterosexuals will never know what it is to be unable to show affection to our significant others in a public place.  We will never have to deal with the disgust of another for a simple every day act of exchanging a kiss.  Of all of the evils of this world attacking love is one of our worst crimes.

It is time that we recognize that all bodies matter.  When we fail to speak out against homophobia and lesbophobia we are supporting hatred and a constructed difference between bodies in a desire to privilege heterosexuality.  Every gay bashing, and every drop of blood spilled soils our hands because by failing to speak out we are supporting violence and murder.