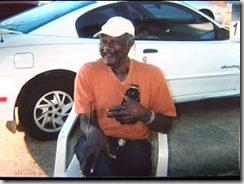 He could be anybody’s grandfather and in fact he was a great grand father.  This 73 year old cancer survivor was enjoying a barbecue and some family time when the police arrived to question his son Shawn Monroe.  At the time of this incident Monroe had no standing arrest warrants pending.  The media of course make a point of letting the public know that Shawn has a lengthy record.  The fact that someone has a criminal past is often used to delegitimize any of their commentary and set up the ground work for victim blaming. 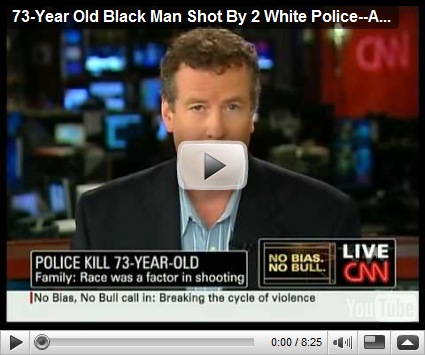 I certainly do not know how much evidence is needed to prove that we continue to live in a racialized society. The election of Barack Obama for some blacks was a signal of how far we have come but clearly whiteness views his ascension to power as a call to arms.  They have marshalled police forces across the nation to murder blacks upon the flimsiest of excuses.  What are the police but a neo version of the KKK run amok with the freedom to perform violence on innocent civilians at will? 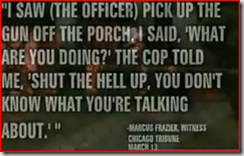 When they shot an unarmed man, their initial reaction was not shock or sorrow that someone lost their life but to cover up their heinous crime.  This is no different than when officers  attempted to plant drugs on Kathryn Johnston after bursting into her home on a trumped up no knock warrant.  The social myth is that police exist to keep society safe but in actuality much of their job entails terrorizing people of color into submission.  Their corruption often goes unchecked as the blue wall of silence descends to protect white privilege at all costs.

When the police chief of a town can make the following commentary there can be no doubt that race plays a huge role in how the law is enforced.

“If I see three or four young black men walking down the street, I have to stop them and check their names,” said [Homer, Louisiana Police Chief Russell] Mills, who is white. “I want them to be afraid every time they see the police that they might get arrested. We’re not out there trying to abuse and harass people—we’re trying to protect the law-abiding citizens locked behind their doors in fear.” 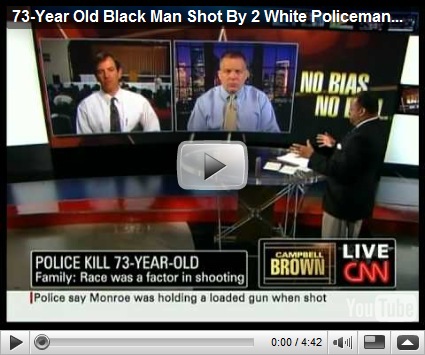 The only thing threatening about this old man was the colour of his skin.  Blackness is often the only provocation that officers need to become violent. When we look at the type of person that is attracted to this kind of work is it really any surprise?

A young girl gets beaten for throwing her shoe. Jimmy Blackwell got beaten so badly that he lost the sight in one eye. Dymond Miller somehow got confused with a white prostitute .  Robbie Tolan had the audacity to stand in his own driveway when the police decided that no black man could possibly afford to live in that neighbourhood.  Somehow, Oscar Grant despite being in handcuffs was resisting arrest and ended up dead.  Finally there is the story of Adolph Grimes III who was shot 14 times with 12 of the bullets entering his back.  How much of a threat can you be when you are not even facing the officer doing the shooting?

Many have asked when blacks are going to stop using race as an excuse and the answer is simple; when whiteness stops slaughtering us at will.  How much black blood must flow through the streets before these rogue officers are made to pay for their crimes? Their actions are clearly white panic at the mere thought that we could possibly one day achieve equality because surely it must be recognized that though Obama may be commander in chief, race continues to be a divisive issue.

Whiteness can afford to sit in coffee houses and chit chat about race relations; it can afford to wear ironic t-shirt and baffle why blacks just don’t get it but for those of us that are of color, each day we must fear that the next interaction with the long arm of the law could be our last.

There is not a single responsible black parent that does not speak to their child about how to react when stopped by the police.  Our fear forces us to tell our children that they must announce every action, speak slowly and clearly, never show any forms of resistance, and at all times keep their hands visible.  Following these directions could be the difference between life and death.  While we are having these essential conversations white parents get to spread the lie of officer friendly and how benign he is.

If a 73 year old cancer survivor cannot be safe in his own home, what hope is there for any of us?   Black rage is not unreasonable nor is it unwarranted; it is the expression of every single slight, and every single drop of blood that has been spilt so that whiteness can live with undeserved privilege.  It is not militant to demand equality and it is certainly not militant to demand human respect; only in a world where some bodies are deemed more valuable could this possibly be interpreted as the noise of a discontented rabble.  When Monroe finally gets laid to rest he will simply be just another black men who met his death through violence to uphold our dissonance in worth and value and if that isn’t a sad testament to how little we value life, I don’t know what else is.