Black In America And Gay 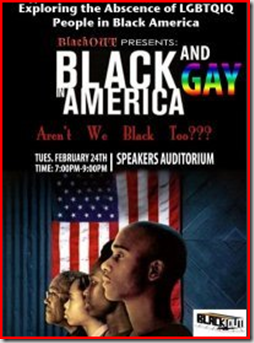 Last year CNN aired what they declared to be a ground breaking documentary entitled Black in America.  It was supposed to be a revealing look at  at the struggles blacks face to survive .  It was divided into two sections; the black man and the black woman and the family.

One of the major critiques levelled at this supposedly groundbreaking series was it erasure of members of the community that identify as GLBTQI.  It should be noted that though this documentary claimed to give America a look at a community that it regularly ignores, by the erasure of our GLBTQI members, all this documentary did was recreate ideas that we have normalized. Blackness is very much associated with heterosexuality. There are POC who identify as GLBTQI and even though the white run media did not see fit to acknowledge their existence, they have been a vital part of our community.  Not content to be invisible in discussions,  Georgia State University's LGBT group Blackout sponsored a forum last month that addressed the issues facing black Americans who also identify as gay, lesbian, or transgender. 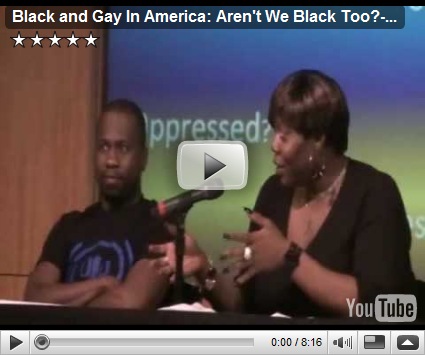 What I loved about this video, was hearing directly from African Americans, who identify as GLBTQI.  Often GLBTQI issues are filtered through the white members the community and the issues of the black community are filtered through the lens of heteronormativty and cisgender privilege.  The word most associated with black GLBTQI movement is silence.  These brave pioneers not only shattered the silence they sent a message that resonates.