Chris And Rihanna The Violence We Don’t Talk About 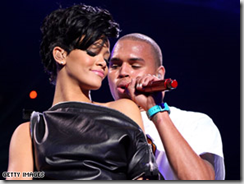 Well it is official, Chris Brown has been charged for beating Rhianna.  When the incident first became public knowledge many rushed to the defence of Brown.  There was much equivocation regarding what she could have done to cause him to be angry enough to become physically violent, as though there is ever any action that could legitimate a man beating a woman.

I don't think Chris would just a hit a girl like that. She had to do something or say something out the way for him to really hurt her," said Nika2hot on MTV.com

Blaming the victim is something that is common place within our society.  Black women in particular are routinely told that any criticism of black men is betraying our race.  Uplift has become associated with supporting the black male patriarchy thus normalizing hyper masculinity within our communities.   When Alice Walker dared to write about incest, sexual violence, and domestic abuse in The colour purple, black men claimed that they were being demonized.  Walker was forced to defend her work in the face of much anger and resentment.

"I think the most chilling thing to me about the response to The Color Purple was that people said 'this doesn't happen,"' she says. "They said this was totally an anomaly. This is all Alice's problem. But what was really upsetting was the total lack of empathy for the woman. Not one person said that even if this happened every blue moon--which we know it does not--and it only happens to a very few women or children, we ought to look at this because we don't want those women or children to be suffering. Nobody said that. And I think that's an indictment of us."

The fact of the matter is that violence against women occurs across race, culture, class, and ethnicity.  It continues on because we silence the victims and exalt the perpetrators. The images of Rihannas beaten and bloodied face were splashed across media outlets and yet it was Brown who was offered sympathy and understanding because he looks cute dancing across a stage.  The fact that we were immediately willing to offer him the benefit of the doubt to him instead of Rihanna, speaks loudly about what bodies are valued in our society.  Each and every day a black woman is beaten by a black man and this is not deemed worthy conversation for the main stream media. The only reason we are aware of this case is because it involved two celebrities.

Violence within our community is not a discussion we wish to have.  Since we set foot on the western hemisphere whiteness has constructed us as sub human creatures with no impulse control and some believe that by owning the issues that we have in our community we are tacitly agreeing that we are indeed incapable of civilized behaviour.

What we need to do is refocus the conversation so that it is understood that violence against women is not racial; it is about patriarchy and sexism.  Brown beat Rihanna because he grew in a family in which violence occurred and he identified with the abuser.  We must break the familial links that teach children to express their hurt and pain in violence.  We must support the victims of violence and encourage them to find a place where they can heal and re group. Pretending that there are no incidents of abuse, or that victims bring it upon themselves is an abdication of our duty to protect the weakest amongst us.  We are not convicted by the actions of one individual but we are all cumulatively responsible if we fail to acknowledge incidents of abuse when they occur.

People magazine is reporting that Rihanna and Chris are reconciling.  In the face of the description of the abuse that she endured this has caused many to question why a woman would return to this situation.  What must be understood is that even though they are both celebrities the dynamics are the same as in any other relationship.  Abusers routinely isolate their victims from support networks Yand break down their self esteem by being emotionally abusive.  They have been known to threaten an escalation in violence if the victim attempts to leave.  On average it can take between 4-7 attempts for a woman to leave her abuser.

There are those that have declared that now that Rihanna has  returned, that she is no longer worthy of our sympathy. What is this but victim blaming once again?  For whatever reason, she is clearly not ready to end this relationship but that does not suddenly give Brown the right to lay hands on her again.  If the few supporters that she has do not create a welcoming environment, she is even less likely to think that it is possible for her to leave.  What is needed now is support and not judgement.

We can either see this situation as yet another reason to continue on with the cycle of victim blaming, or we can take the opportunity to address the issues of violence that lead to such damage in our community.  When a child is raised with violence they will be violent thus destroying our possibility of future heroes and sheros. Uplift can only be obtained when we value all members of the black community.