The Ebony Experiment: Is It Racist? 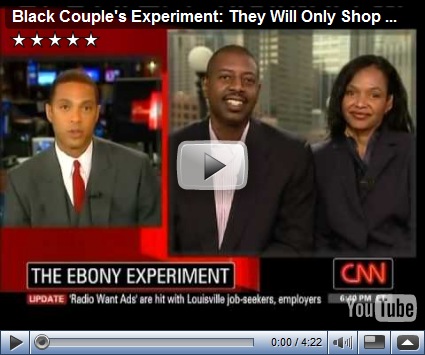 For those that cannot view the video this segment on CNN is about a couple that have vowed to only purchase items from black owned business for the period of one year.   They have entitled their efforts the ebony experiment.

What would happen if Black families across America made real commitments to support Black businesses and professionals? How many jobs would be created? How many homes would be saved from foreclosure? How many new role models would our children have? How much would we improve the quality of life of the average American Black family? How much can we do on our own, together, united…without a government program? What if we could prove – again – that this community can defy history and improve the future by just believing we can and believing in each other?

Buying black is not exactly a revolutionary idea however, it is one which we have stopped  doing since we started integrating more with white people.  There was a time when blacks were dependent upon each other to survive Jim Crow and as such we patronizing the few  black owned  business in existence was a way of life.   One of the seldom discussed fall outs of the civil rights movement was our loss of connection with one another.   Yes, we gained the freedom of movement but it came at a loss of community.

This project if successful will stand as a symbol of the ways in which we can once again work together to overcome tough economic times.  While the recession has been difficult across the board, blacks have been the hardest hit with an unemployment rate of 13.4 percent.  This figure does not include the ones that have been chronically underemployed or simply given up the search.  Poverty continues to plague black America and we have yet to come up with an effective solution to this issue.

Supporting black owned business is just one way of fighting the systemic inequality of the world in which we live.   Blacks do not accumulate wealth in the same manner as whites, as generation after generation we have not been able to pass on assets to our children.  Homeownership which is the surest  path to economic advancement has been denied to us by either racist bankers, or an inability to qualify due to a lack of income.

Anytime blacks reach for some sort of improvement in our living conditions it is met with resistance by whiteness.  If we truly lived in an equal world, buying black would not be a necessity, nor would whiteness find such a suggestion threatening.  The following commentary is from the Black Informant:

I think is is a problem and It seems like the founders are well educated. We as Americans should be treating others equally.While it may be happening, What would happen if Whites only shopped at white persons place Well in the end We will not be united but divided We will.

James Taylor
I couldn’t agree more… we should have black people buy only from black owned stores and white people buy from white owned stores. And while were at it lets send black and white kids to different schools, that really seemed to help things didn't it? How can people be so blind? Call it whatever you want to. Justify it however you see right in your own eyes. In the end all it is is justified racism. I am not and have never been racist, however it is hard to sit by while seeing the hypocrisy and double standards of many special interest minority groups. While applying to schools and scholarships as a white male I was always the odd man out. The fine print would always state that “priority would be given to minority and undeserved applicants including : African Americans, Native Americans, Latino Americans, Asian American, and women.” Well lets see here who does that leave out?…… oh I know how about the white male. But that is socially acceptable right? I don't need a scholarship or get into a good school because I'm white. That's because all white men share their money and job openings at our white man conventions where we plan news ways to oppress minorities. (I’m being sarcastic)
Basically what I’m saying is that this is wrong and that it creates divisions. If you really want to make headway in this country go to school, get good grades, act in a professional manner, and for God sakes stop blaming others for your problems. Only when everyone takes responsibility for themselves can we really get somewhere. To create a country where race does not matter and we truly are all equal. Often times I feel that is not what people from the minority communities truly want….

Philip L. McCleary
Wow black people buying from only black people what an idea!Maybe I will start serving only the whites in my business and see how long it takes the NAACP and god know who else to file a lawsuit for discrimination. I for one am tired of it always being ok for blacks to exclude whites but never can whites exclude blacks. Stand back and watch because I can assure you I will never purchase anything from a black owned business ever again. Please remember YOU made me take this action by force of example!

Sean Phelan
I am very upset at this experiment. We are trying to be one race and not divided by color. With people thinking like this we will never move past color. What if I shopped at only stores owned by “whites” If I went public here I would be called a raciest. What if I stated a new channel on TV called WET - White Entertainment. How about Whit Only scholarships…. We need to stop thinking of color and on the quality of people for scholarships, the quality of service at the business. If the service is good, go back, why should the owner matter? I as a “white” person do not see color. I see people. Why must you see color? Lastly, I am not a fan of the term African American. you are American just like me. I know, I’m not white. I’m Irish American.

The resounding theme in the above commentary is white panic and a denial of white privilege.  I personally love the question of what if whites only supported white owned businesses?  Since the majority of the business in the United States are owned by white people chances are you already do.   You will further note that the WET (white entertainment network) argument made its usual appearance.  When I see this supposition, I often want to ask about the status of ABC, NBC, CBS, CNN and in particular FOX news;  they clearly are not devoted to promoting diversity either in their news, or entertainment programming and BET which is barely managing to stay in business is a threat.   The bottom line is that unless something unfairly promotes whiteness it is deemed racist by those that are determined to maintain undeserved white privilege.

We do not have a level playing ground and it would be foolish for POC to pretend that we do.  We cannot afford to listen to the taunts from the most privileged group of people ever to walk the planet (read: white men) about their supposed discrimination. In the negotiation of other isms, e.g., homophobia, or disability, their ability to completely benefit from white privilege may be reduced however, it does not mean that relative to a person of colour dealing with those very same isms that they do not have a clear advantage.  Whiteness will never commit to the advancement of POC because to do so would eradicate their social power to benefit from our debasement.  I do not know how successful this movement will be, considering issues of transportation and the availability of black businesses to patronize, but I certainly support the incentive behind it.