FGM There Is A Price To Speaking Out

For centuries female genital mutilation was a practice carried about in secret and mourned in tears and pain.  Though the practice is performed by women the justification is to support a patriarchal understanding of womanhood.  Female sexuality is viewed as so wild and uncontrollable that to avoid  a descent into whoredom it is understood that all sexual pleasure must be removed from women.  In many cases this “procedure” is performed with rusted knives and blades under the least sterile conditions imaginable.  Many succumb to death due to infection. 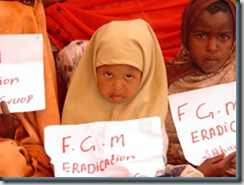 There are those that continue to use the excuse of cultural imperialism to avoid passing judgement on this issue.  According to WHO it is children that are being circumcised. This not an issue about female agency, this is child abuse in it cruellest form.  It is one thing for an adult to submit to the knife and quite another to hold down a young girl, force her to spread her legs and cut her. According to WHO 92 million women a year undergo this torture.

Even as women begin to fight the practice of Bondo male politicians continue to support its continuation.

A recent Sierra Leone child rights bill dropped any mention of FGM at the last minute, and politicians – including President Ernest Bai Koroma – baulk at the mention of the subject.

According to the Independent women that are fighting to stop this procedure are being attacked as well.  Rugiatu Turay is an activist and journalist who was stripped naked and forced to march through the streets as punishment for her open  opposition to FGM.

Her organisation, the Amazonian Initiative Movement, tries to protect young girls from the knife. "I picked the name because I am trying to talk about strong, powerful women," she says Ms Turay, who works with her 20-strong staff in and around the northern town of Lunsar. So far, she has persuaded about 400 practitioners of female genital mutiliation (FGM), who are often called soweis, to lay down their blades and stop their role in the traditional bondo ceremony. "Silence means consent. But if you say the truth people listen ... We go to the schools, mosques, everywhere."

As reward for her tenacious efforts, she has received death threats and been attacked by juju men, sometimes armed with magic, sometimes with machetes. She describes a time when more than a hundred people paraded a symbolic corpse outside her home to suggest her own death: "They came right in front of me sharpening their cutlasses."

But so many times has she failed to die, that locals now think she is immune. "Now they believe I have special powers. They do nothing to me."

As westerners we cannot hide behind our so called politically correct politics of non interference when it comes to this issue.  It seems to me that when there is economic gain to be made i.e oil, or precious metals we give little concern for local customs or traditions; it is only when it comes to the most vulnerable that we assert that we don’t have the moral authority to interfere.  Though we do not acknowledge it because women act as gatekeepers, FGM is maintained for the purposes of patriarchy and since much of the world has evolved to support patriarchal norms this issue is not seen as pressing.

We must muster the courage to stand behind women like Rugiatu Turay.  This is a battle we cannot afford to loose.  There are too many lives at stake.  We must find away to help the women who perform these right of passage ceremonies find a new source of income so that they are not dependent on the mutilation of women.  We must sound the alarm continually and with spirit so that no woman will ever have to undergo something so horrific to support male hegemony.  If we can cast aside custom and tradition so that we may have a shiny bauble to wear on our fingers, surely we can choose to do so to save the life of a young girl.  Remember that s/he who saves one life, saves the world entire.