For Rent : Whites Only 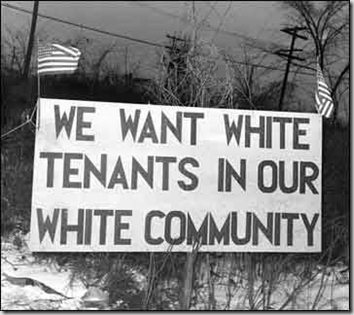 Yes, it is the year 2009 and a black man is president of the United States.  There are those that find any kind of social progress threatening because they fear the loss of undeserved privilege.

A Niagara Falls N.Y. Woman decided to place a sign on property advertising it for rent.

“I rent three bedrooms [at her address to] white people Niagara Falls.”

When the police instructed her that she had to remove the sign she responded, “I can do what I want. I live in America.”  After protest on her part, the sign was eventually removed.  Police report that she had 7 more signs ready to hang.

Is everyone feeling suitably post racial now?  Daily there are repeated incidents of racism and yet blacks are told, look how much better things are getting.  We are accused of persecuting whiteness and framing it as inherently evil.  While we must be careful to judge each person individually how can there still be any doubt that whiteness routinely acts systemically to disenfranchise and exploit bodies of colour?

“Responsibility” is the code word levied at us which negates the fact that whiteness still very much controls discourse.  He who has the power to name or label ultimately controls how bodies are understood.  Acts like the above reify a socially constructed difference and seek to assert a hierarchy of bodies.

These assaults have a cumulative effect, which results in a society that is continually divided on the basis of race.  From the moment of birth a black child is repeatedly told that they are less than and each interaction affirms this; whether it is the racist media portraying blacks as pimps, thieves, and drug dealers. or the education system which routinely pushes blacks into non academic streams, whiteness aggressively seeks to assert power coercively.

Our rage and our anger at this continuing apartheid is dismissed and or minimized.  Hating on whitey we are told is inappropriate despite the fact that systemically whiteness has acted with extreme prejudice and violence; conversely no matter how illegitimate the basis of the emotion, white anger is always realized and accepted as justifiable.  Reverse racism has become rallying cry as whiteness continues to rail against Black History month, The State of the Black Union, BET and the NAACP.    The existence of these events and organizations is cited as proof of the exclusionary behaviour of blacks rather than understood as being a defensive mechanism to the racism that POC face in the United States.   The fact that all faces of power are over represented by whiteness is not accidental and yet the few organizations that exist to counter this hegemony are deemed reprehensible.  That blacks do not exist with the institutional power to realize any feelings of prejudice they may have is never factored in, in the effort to ensure that the ability to benefit from constructed difference is solely the preserve of whiteness.

When Holder made his speech regarding the state of racial divisions many rose to counter his assertions based in privilege.   We continually speak about race however it is whiteness that controls the terms of conversation and quite often humour is used as a tool to make racism more palatable. 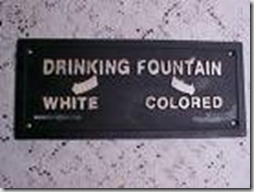 Just a few days before this women brazenly displayed her racist attitude to the world, a man was sentenced to probation for placing a sign which read whites only on a drinking fountain in Niagara Falls N.Y.  He claimed that his action was meant as a joke.  While he did face legal consequences for his actions it must be notes that the ability to laugh at the pain of others is an expression of power.  By placing that sign not only did he minimize the experience of blacks under Jim Crow, the net effect was to assert that such segregation was and is socially unimportant.

Though legalized segregation has been discontinued, the dissonance in our sense of worth and value has allowed economics to ensure that whites still have the ability to control what spaces are inter racial.  The existence of neighbourhoods largely populated by POC which are created by white flight, ensures that many children are not educated in spaces in which are inter racial.  The ghettoization of property means that even the lucky few that are able to purchase land must do so in the full knowledge that it will not accrue in value in the same manner as white owned property.

There are many conversations we resist having because to do so certain truths must be owned.  Whiteness has no right to the historical undeserved privilege that it maintains.  Whiteness is a systemic force that acts collectively and it must be understood that all behaviour is purposeful.   We repeatedly return to the basics and review anti racism 101 because whiteness has committed to an intentional racial ignorance which is often expressed through silencing, and rejection.   We can never be a post racial society until the terms of the conversation change, thus asserting an equal value for all citizens.