The Game Of Life And The Gay Agenda

The game of life was created by Milton Bradley in 1860.  In terms of board games, it probably cannot get more Americana than this.   Generation after generation have spent family game night playing over a bowl of popcorn, tallying up wins and  sharing good conversation.

Just like most things that have become associated with the traditional patriarchal family, The Game of Life is decidedly heterosexist.  What constitutes family has changed over the years to include same sex couples, families that have one or more trans gender members, or even inter generational living however, The Game of Life has remained stagnant. 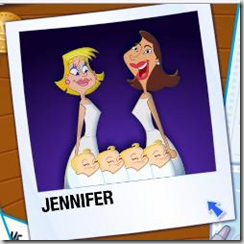 Shockwave.com has decided to upgrade this game to include same sex families.  Now you can choose to be a woman and marry a woman while raising 4 kids in this new downloadable version of the 1860’s classic.  Since our society has decided to privilege heterosexuality there are precious few images that reflect the ways in which what we consider a family has morphed over the years.

Instead of seeing this as a positive step towards inclusion and allowing children to participate in an activity that shows a positive validation of their lives, there are those that claim this new version is damaging.  Somehow, this version of Life is perceived by the right wing as promoting the gay agenda…cue spooky music.

"You know how kids are," the mother told WND. "My daughter noticed right away (even before I did) and clicked on one of the girls instead of one of the men and then asked, 'Mom, how come I can marry a woman?' And then that led into a lot more questions that, quite frankly, I was not ready to talk to my 6-year-old about."

WND followed the mother's example and played a game as "Jennifer," who chose to marry another woman. The course of the game eventually added four children to WND's lesbian couple.

The mother claims to have posted an objection on the game's review board, only to have it removed by an administrator.

"I went back to the web site and left a very respectful review of the game just stating that this kind of thing should be left out of kids' games, and the Shockwave.com administrator removed my post, stating it was inappropriate," the mother told WND. "I had no idea how insidious they were being with pushing the homosexual agenda."

"Your guidelines ask us to 'keep your language safe for the kids,' yet here's a game where children may choose homosexual marriage and child-rearing," WND wrote. "Many sections of society accept this as normative, but many also would consider this too mature a theme for children. Others would consider this downright offensive. Is it appropriate to include, for example, lesbianism in this game?"

Shortly thereafter, WND's comment was posted, but the word "homosexual" was altered to "****sexual," presumably because the stand-alone prefix "homo" is sometimes used in a derogatory fashion.

WND sought comment from Hasbro, the company that now owns the rights to Milton Bradley games, but received no response.

Golly jee whiz beav you would think it was 1950 and everyone lived in a neat little suburb, where the mommy stayed home and daddy went out to work everyday in a suit and tie.   We cannot possibly fill children’s heads with anything approximating the truth; heavens, what if they started to view all people as equal?  What if they actually learned that not all families fit the patriarchal norm but that the children living in these homes are loved and well taken care of?

We all need to fear the massive “gay agenda,” even though everywhere we look heterosexuality is affirmed as good and normal.   All of this whining and protesting about concern for the children really amounts to nothing more than a desire to preserve and promote undeserved heterosexual privilege.

My son is eight years old and we have been speaking about different kinds of families in  terms that he could understand since he was three years old and first started asking questions about reproduction.  I take great care to point out that not all families look like ours and he is not in the least bit damaged by the experience.  He is well aware of the fact that sometimes two men marry, or that two women marry and he has come to see this as completely normal because his father and I are committed to raising a child that is not only aware of whatever privilege he may have in this life, but one who has a deep and abiding respect for all people.

I fail to see how a child is harmed by learning that love comes in all different forms.  When I think of the violence, sexism, racism and ableism that children are exposed to on a daily basis, a discussion about the fluidity of sexuality and love can be a life affirming situation to reify. I am further incensed that the right wing fundies continue to use the concept of harm to children to justify their bigotry.  True concern for children and their ability to negotiate a world that privileges certain bodies should result in honest conversations where all bodies are affirmed as good and equal.   This concern troll mother needs to get a clue.  She is doing her daughter a disservice by insisting that she only participate in activities that affirm our dissonance in worth and value.