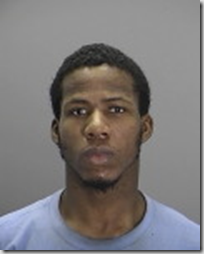 Antwan L. Grandberry  however, does not know what the word shame or respect means.  His response was to go to the front of the house ring doorbell and then punch his mother in the face when she answered the door.  He has been charged with domestic battery.

Over and over again black women are shamed for talking about the times when black males are violent towards us.  To discuss this issue publicly is to risk being called a traitor to your race.  Pretending that black men do not abuse us only places our lives at risk.  Many in the community have associated uplift with affirming the black male patriarchy and therefore, to publicly make an issue of the ways in which our bodies are often offered up as human targets is deemed unacceptable.  Violence against women cannot fall into the category of family business.  While I certainly do not believe that the black male is somehow genetically predisposed to be violent, pretending that this is an issue that only effects other communities allows men to beat, abuse, and oppress with impunity.

So strong is patriarchy that it fails to even take ownership for its actions.  The victim is constantly blamed for the actions of the abuser.  Even as I write this people are still finding a way to blame Rhianna for the vicious assault allegedly perpetrated by Chris Brown.  Even the comments on this story amounted to vicious victim blaming.

This mother obviously failed her son on several levels. She never taught him appropriate behaviour or respect. He has no shame in his actions and probably no remorse. Bring back morality. Bring back solid biblical education. Bring back active parenting. Bring back prayer in schools. This incident is a pathetic and sad but perfect example of how dysfunctional and out of touch so many families are today.

Obviously the kid had a solid upbringing in a good home with a loving mother:-).. She shoulda just let him finish....

Violence is always legitimated by asserting that somehow the victim brought it upon themselves by their actions.  When Baby Wipes (read: Terrence Howard) punched his wife, it was because she had the temerity to disagree with him in a phone conversation.  When Chris beat Rihanna it was because she checked his phone messages and became upset when she read about a booty call he had planned on making.   When men beat women for some perceived fault it is really about asserting control.   They privilege their thoughts and their emotions and when challenged they lash out physically.  Violence against women is the culmination of the over valuation of masculinity.  As long as we continue apologize for these acts of violence, women’s lives will continue to be in danger.  No matter what any woman says or does, it is never acceptable for man to respond with violence.