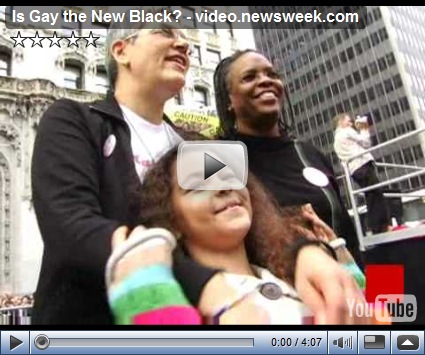 Why do some African Americans feel, or they can’t see that we’re just asking for rights? For so long they asked for rights and all of a sudden..maybe it just don’t happen soon enough.  Maybe we should have asked for rights back in the sixties, you know back when they were getting their rights. I mean if we would have asked then, and they would have shown interest yeah we’re getting our rights we need to give it somebody else but now we’ve got this huge 40 year gap.

Therein lies the problem.  First as I have said many times, the fact that some members of the LGBT community feel compelled to act as though blacks are denying them their rights is evidence of their white privilege.  How is it possible that one of the most socially maginalized groups is somehow denying white gay men equality?  The supposition would be laughable, if it were not an expression of the desire of some to continually privilege whiteness at every turn. To oppress to the degree at which blacks are accused, one would need to be able to display power and it is clear when we look at the racial divide in the US, power is firmly ensconced in white hands.

Yes blacks can vote but that does not mean that many were still not illegally stricken from voter rolls  (2000 PRESIDENTIAL ELECTION).   Yes, affirmative action exists but even with that the income differential between whites and blacks is startling.  A black man may be president of the United States but blacks are still in every sense of the word second class citizens.  There have been great achievements to attain civil rights for blacks however, the struggle is far from over and even the implication of such is a denial of our lived experience.

As Michael Crawford elegantly states, the face of the LGBT community is resoundingly white and this means that same gender loving people of color are marginalized by a movement that claims to represent them. The idea that blacks are repressing gays and lesbians precludes the idea that there are gays and lesbians who are black.  The privileging of whiteness is obvious by simply examining what is considered to be LGBT leadership.

Michael Crawford is quite right when he states;

I found this video at the Bilerico and the following is commentary in that thread:

Not the same as "black" but worse. To be a slave was not a death sentence but to be homosexual was.

Comments like this are exactly why African Americans get resentful when the “gay is the new black” meme is pulled out.  Not only do some white gays and lesbians want affirmation of their lived experience, they want to posit that it is somehow worse than the experience of another.  This is oppression Olympics at its finest and it is infuriating.  I wonder how he would feel if he could look at the bottom of the Atlantic and see the skulls of the millions that died on the middle passage alone; would he then be content to still declare that being a slave was not a death sentence?  Statements like above unfortunately are expressed quite boldly and without any recognition of their inflammatory and racist nature.

How many times can one stand outside of a movement and continue to argue for their equality and  be subject to such assaults?  Denying and or appropriating our experiences will not gain allies, in fact it will serve to alienate those that are willing to publicly advocate for gay and lesbian rights.  While I would agree that blacks definitely need to affirm the rights of all peoples, using a strategy that deliberately eliminates same gender loving blacks and denigrating our history, and our struggles, will not encourage the kind of solidarity that is desired by the white LGBT community. Gay can never be the new black because we continue to exist and our struggles have not ended.