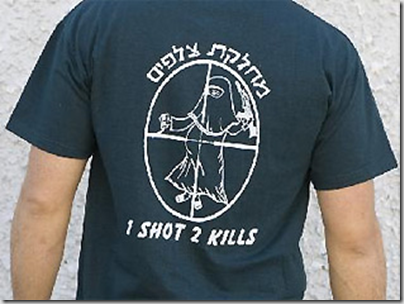 According to the Herald Sun the above shirt was worn by Israeli soldiers to mark graduation. Another shirt showed a child carrying a gun with the words: "The smaller they are, the harder it is".

No matter where you fall on the Israel/Palestine debacle it simply goes without saying that the the above image is unacceptable and exists for no other reason than to promote hate.  As I stare at this I barely have the words to describe the disgust flowing through my veins.

In times of armed conflict it is the bodies of  the bodies of the women  and children that are made to pay for the hate of men.  To promote the death murder of a pregnant woman is to sanction a genocide.   Though the Israelis feel that they have a historical right to this land, the actions that they have taken to maintain their neo-apartheid state have been reprehensible and this is just the latest in a long line of wrongs that they have committed.

The Israeli military sought to dismiss the shirts as "tasteless humour" and condemned the soldiers involved as "not in accordance with IDF (Israeli Defence Force) values," according to the Assoociated Press.

AP reported the shirts surfaced as Israel faced accusations of misconduct during its three-week war in Gaza which officials said left about 1300 Palestinians and 13 Israeli soldiers dead.

I can barely stand to read the news from Gaza and the West Bank.  Each night it is filled with more and more bloodshed.   Palestinian blood flows freely as they continue in a struggle in which they are clearly out gunned and out resourced.  Even with the knowledge that this can never be a battle between equals these shirts evidence the degree of hatred to exterminate a people in the name of conquest.   Though much of the conflict uses religion as a justification, there is little difference between what is happening to the Palestinian people and what occurred in the western world to our Indigenous peoples.

To speak out about the criminal actions of the Israeli military and state in the western world is to risk being called an Anti-Semite.   We are so filled with holocaust guilt that we have been silent while Palestinians are starved, denied medical treatment, live with reduced water and electricity, as they cry over their children who are slaughtered for throwing rocks at a tank.  When we fail to speak are we not committing the same crime?  Are we not suborning the ghettoes that they are housed in and the inferior education that their children receive?

It is not enough to throw up our hands and declare that this situation cannot be resolved when each day brings new death to innocents.   We have the luxury of living lives of relative freedom and safety, while our governments fuel the conflict by continuing to sell Israel arms.  The state of Israel is the largest purchaser of US military supplies.  Our hands are not clean, even as we cite so-called Palestinian terrorism to justify our collusion.

When I look at this t-shirt, I see all of the little compromises that western governments have made to support a nation that shows little to no respect for human rights and systemically seeks to destroy a group of peoples.   How are their actions different than from what occurred in apartheid South Africa?  The only reason we fail to call out this behaviour and take a stand is because of the strategic position that an alliance with Israel allows in the Middle East, Holocaust guilt,  and the powerlessness of the Palestinian people.  It was a western nation that (read: Great Britain) who set the stage for the conflict by sanctioning the  state of Israel in the first place. To be clear, I am not calling for the eradication of Israel, I am however stating unequivocally that it has no more right to exist on that land than the state of Palestine.

The two state solution is the only possible way to allow for the humanity and the right to life of both sides.   We cannot and should not continue to support such evil.  The majority of westerners cannot imagine what it is to live and grow in a war zone.  Since it does not touch our lives we readily accept the propaganda preached to us on the nightly news and fail to acknowledge that there are two sides to this conflict.

When we examine the imbalance in the death toll alone how can we possibly continue to justify supporting this by continuing to sell Israel arms?  When Obama announced that Israel was one of the United States greatest friends, there was no uproar, only smiles of approval.  What is this but tacit permission for the state to continue to slaughter innocent Palestinians?  Had he dared to speak openly about Israel's criminal behaviour he would never have been elected; so great is the desire of many to devalue the lives of Palestinians.   One cannot possibly believe in life and the value of all, and continue to support a state that is determined to eradicate a group of people in order to secure ownership of land.