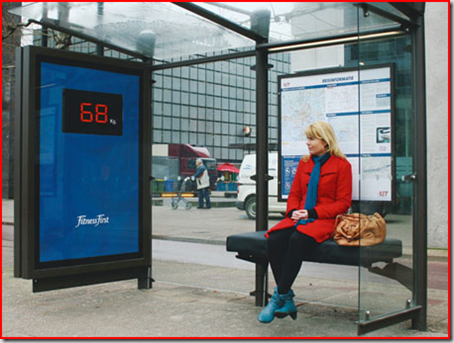 Imagine after a long day on your feet, that you decide to grab a seat on a bench when you discover that your perch is actually a scale that announces your weight in bright neon red numbers for the world to see.  There is no warning that you are sitting on a scale just the obvious public pronouncement of your weight.

This is the latest marketing scheme from Fitness First which is located in the Netherlands.  Well the diet and exercise industry ever stop shaming people into fitting into body archetypes that are unnatural to gain a profit?  When are people going to realize that one can still be very physically fit and still be fat.  Have people never heard of a false positive?  Weight is not necessarily and indicator of how in shape someone is.  There are people that 5’3 110 pounds who could not jog around a city block and yet somehow miraculously they will be thought of as fit.  Stop the fat shaming for profit it is disgusting and is based on false premises.

Don’t we already have enough young girls starving themselves, and purging to try and match the photoshopped images in popular magazine without reaffirming their fears of unacceptability by publicly announcing to the world that they don’t measure up?  The diet and exercise industry could care less about the emotional trauma that they create because their end goal is always profit.  In these industries we can see the prefect connection of patriarchy and capitalism and the ways in which they collude to not only keep women poor but enforce a constant need to conform to the male gaze.

If this was about anything other than profit and fat shaming they would at least attempt to offer discounted memberships to those that were impoverished.  How many poor people do you know that have memberships to exclusive fitness clubs?  They will sell you the line about tough love, and play on your emotions but the sooner they part you from a dollar they happier their profit margins are.  This is not a out a concern for the public good and continually framing the body image debate in this manner is a strawmans argument.