It’s The Great White North For A Reason: Neo Nazis In Canada

Many Canadians function with the idea that we are a society that has moved beyond race.  We look southward with a false sense of satisfaction and declare ourselves evolved however; the POC who must daily negotiate the less overt form of racism that is practiced in Canada know all to well what it is to come face to face with white privilege.

We know for instance, that Aboriginal Canadians are over represented in the penal system and rather than seeing this as a function of systemic racism, we choose to perpetuate the lie that Natives are drunks, and thieves.   We know that many Aboriginal Canadians live in poverty and instead of looking at the ways in which we have purposefully impoverished them, we continually repeat the lie that Natives are lazy with no desire to work. The rates of sexual assault and rape are highest in the Aboriginal community and  instead of recognizing this as the twin evil of patriarchy and racism, we have constructed the myth that the Native woman is always sexually available.

We choose to ignore these associations because it privileges whiteness to do so.  The face of racism to Canadians looks like this: 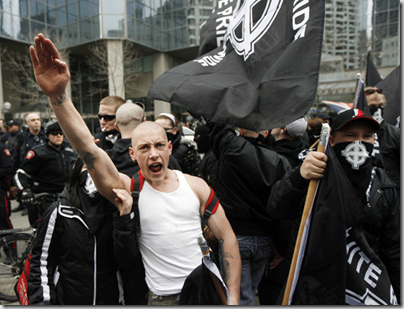 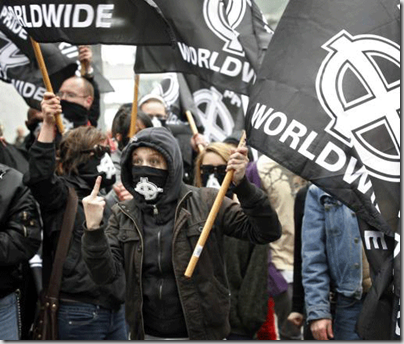 While these White Pride Neo-Nazis are surely a virulent segment of our society they are not the complete face of racism.   They stand out simply because they have the courage to verbalize and or physically display their rampant hatred of bodies of colour however, attitudes like theirs have always been a part of our society. Politicians have publicly displayed their racism and yet we still have the nerve to declare this a colorblind society.  Pointing southward and declaring ourselves “evolved,” does not mean that the ways in which we have constructed race does not unfairly benefit whiteness.  From Jamaican born Ben Johnson, to the construction of gang violence as consisting solely of new immigrants of color from the West Indies, we have invested much time into assuring that a Canadian identity will be understood as white and affluent.

There are those that will look at the above images of the Neo Nazis and radically declare that they are not racist.   What they will fail to recognize is that one need not wear a swastika to be a racist.   Being steeped in a culture that presents a binary construction of race wherein whiteness is always understood as good, makes the internalizing of racist ideals a natural occurrence.  Whether you clutch your purse when you see a group of young black males,  or find yourself citing your black best friend as proof of how advanced you are; racism is part of your thought process because you have been taught from every single agent of socialization that a hierarchy of bodies is just.

Canada is no less racist that our cousins in the United States, we have just come to express it differently.  When I inform people that the Nazi death camps were modelled on our reservation system, there is always an expression of shock.  We have so whitewashed our history that learning about Samuel de Champlain, or Jacques Cartier are prominently featured, while we ignore the near genocide that occurred so that we could claim this as our home and native land.  We love to speak about the racism displayed by the founding fathers of the US, and ignore that John A. Macdonald called for the public whipping of black males who threatened female (read:white female) purity.  How can a society that is built upon slavery (yes it happened here as well) and the near genocide of a people in the name of conquest possibly result in the utopian equality that we have falsely declared to the world?  Until we can own the fact that racism is just as much a part of Canadian culture as hockey night in Canada,  bodies of color will continue to exist as second class citizens.

H/T Restructure Via Twitter and CIV Chinese in Vancouver for the images.