Julia Seranno: On The Outside Looking In 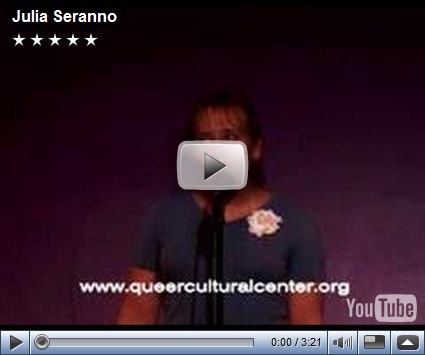 Julia speaks about the hypocrisy that Radfems display by accepting trans men and showing intolerance towards trans women. Transcript Is Below The Fold..

Things began to change a bit in the mid 90’s as a growing number of dykes started coming out as trans and referring to themselves as men.  This caused many to question their views and over the years this lead to a  level acceptance of trans men in the lesbian community.  So you may be asking where do transwomen fit in?  Well we don’t unfortunately.  These days it is not uncommon to see the word trans used to welcome trans men but not trans women on everything from lesbian events, to sex surveys, and even play parties.  Even at Michigan women are no longer defined based upon their legal status, their appearance, or their self identification, but on whether or not they were born and raised as a girl.  While performances by animal and my (inaudible) who identify as transgender and answer to male pronouns are invited to take to the festival stage each year, someone like myself who identifies 100% as female, isn’t even allowed to stand in the audience.  And if that isn’t bad enough many now use  Michigan's tolerance to folks on the FTM spectrum to argue that the festivals policies are proof that it is not transphobic.  Well I am sorry anyone who considers transmen to women and transwomen to be men is not an all of the transgender community.

Yes I do know what those women have been through I have had men force themselves on me.  Like you we transwomen are abused and physically violated for being women too.  …(inaudible) Don’t transgirls forced against our will into boyhood have been raped by male culture. Every trans woman is a survivor and we have triggers to. And my trigger is pseudo feminists who hyper bitch about “women born women you go”.

My dyke community needs to realize that the anger that they feel when straight people try to dismiss the legitimacy of their same sex relationships is what I feel when they try to dismiss my femaleness.  I am a transexual in a dyke community where most people haven’t had to fight for their rights to be recognized as female.  It’s just something they take for granted and I am a woman in a segment of the trans community that is dominated by  female born gender queers and folks on the ftm spectrum, neither of whom have had to experience the special social stigma that is reserved  for feminine transgendered expression and for those that transition to female.  Being a transwman has given me a unique and valid understanding of what it means to be both female and feminine, an issue which many women here at Michigan seem  unwilling and unable to understand.  At camp trans I learned to be proud that I am a trans woman.  When I call myself trans does not mean that I necessarily transgress the gender binary but that I straddle two identities; woman and transexual that most people think are in opposition to each other.  I will continue to fight for inclusion at Michigan because this is my community to.  I know that many people will try to make me feel like an alien in my own community but I will take on their prejudice with my own unique perspective because sometimes you see things more clearly when you have been made to feel like you are on the outside looking in.