Megan Mccain took on Anne Coulter and instead of addressing the issues she raised Ingraham decided that McCain was too fat to be worthy of a legitimate response.

INGRAHAM (mocking): Ok, I was really hoping that I was going to get that role in the Real World, but then I realized that, well, they don’t like plus-sized models. They only like the women who look a certain way. And on this 50th anniversary of Barbie, I really have something to say.

In what world does this woman think that it is not demeaning to reduce a woman because of her body size.  If anything it reveals a complete lack of intelligence and an internalization of patriarchal beauty images.   Ingraham not only did her self a disservice but all women by turning into a ridiculous high school like bully instead of addressing the issues that were raised.

McCain did not take this assault lightly in and in appearance on the view she responded. 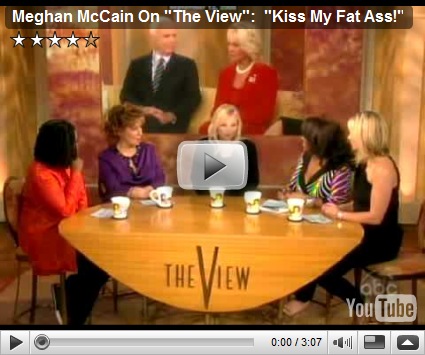 Transcript is below the fold.

Meghan McCain: “I think with Laura Ingraham the worst part about it for me is that with my personal blog a significant majority of the readers are young women and I can’t say with the daily beast I’ve only been writing for them for a few months but I assume a lot of young women are reading it.  And what do young women think when I speak my mind about politics and I want to have a political discussion about the ideological future of the republican party and the answer is she’s fat, she shouldn’t have an opinion.  What kind of message are we sending young women? It’s terrible, I have a little sister and what kind of example is this setting for her?  Weight is not the … I’m a political writer on a blog and all of a sudden I’m too fat to write ya know.  Everyone from Tyra Banks, to Oprah, to Hilary Clinton to my mother, why are we so obsessed with weight why? I know specifically for me this is so…I’m a pop culture junkie .  When Tyra Banks went on her show in her bathing suit and said kiss my fat ass, that’s what I feel like right now.  I’m like kiss my fat ass. There’s no place for weight criticism of women in 2009.  There’s no place for it and if I have to come on this show and say that there is no place for any woman to have  her weight criticised not matter what age she is.”

It is a sad thing that McCain had to make such a declaration publicly.  Despite the gains of the feminist movement many women have so internalized patriarchal values that participating in the shaming of other women is still not deemed problematic.

Ingarhams commentary also reveals the degree to which people assume it is okay to fat shame someone.   These standards that we have created only serve to create in groups and out groups.  These in groups use their social power to shame and thereby maintain a hierarchy of bodies in which they are continually privileged.   McCains weight was in no way germane to any criticism that she made of Coulter,  Ingraham only raised the issue because of privilege and a desire to use social power to silence.

Though her commentary has been called out as asinine and fat shaming, what we should all realize is that fat shaming occurs daily and often with little commentary.   Though it is most often directed at women, men are subject to it as well.   Rush Limbaugh is the perfect example of weight being used as an attack instead of dealing with his ideological positions. He is not ass because he is fat, he is simply an ass and the continual reference to his corpulence only allows him to argue that there is no legitimate defence against his pontificating. The body weight of an individual has no relation to  their ability to contribute to society.

We should also be cognizant that no only does fat shaming reaffirm our social hierarchy it is a necessary component to increasing the ever growing profits of the diet and exercise industry.   Food that is technically not considered diet food is often marketed to us as low in fat or low in calorie.   We are told to choose a particular brand of cereal not because it is contains essential vitamins but because it is low in calorie. The exercise industry goes on seasonal attacks.  At this very moment they are encouraging people to slim down to get into a bathing suit.  It seems to me that bathing suits come in all sizes and therefore the implication is that if you are fat, you should be so ashamed of your body that revealing it in any form is unacceptable. 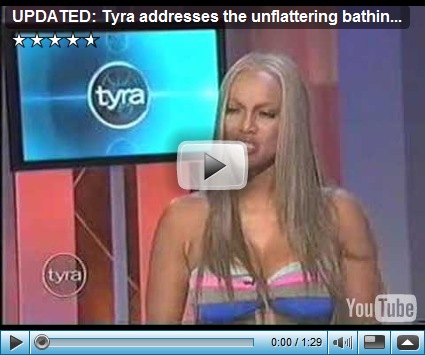 In closing I must agree with Tyra and McCain…Kiss my fat ass as well.  You shall not profit from my debasement.