Memo to Jimi Izrael: Fronting as Straight Always Pays Off

This is a cross post by blksista.  She blogs at This Black Sista’s Page.

I’m a mid-Boomer/Jones Generation/unmarried/straight/Nichiren Buddhist/progressive and writer, interested in just about everything live and in color. Presently, I live in Madison, WI.   But not for long. 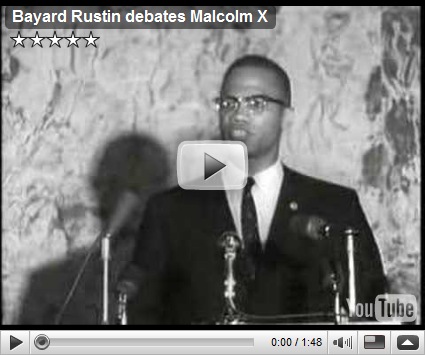 There are some days that I think Jimi Izrael of The Root doesn’t know what else to say. I wanted to reply to him forthwith about his March 12 comment about Bayard Rustin, and the beatdown he received during a famous debate with Malcolm X in the early Sixties. But I held my peace. While Izrael was supportive of a bio flick about Rustin’s life, and was appreciative of pacifist Robert Gore’s eyewitness report on the event that made him question his own politics, I went back and forth about responding on The Root’s pages, and then finally resolved that I couldn’t let this lie.

The late Rustin had promoted a political line incompatible with that of the then-spokesperson of the Nation of Islam in 1962, and that was an alliance with progressive and liberal whites to reach the goal of racial equality. Izrael rightly put forth that it was perhaps “an unfortunate incident of backseat (homosexual) passion that got Brother Rustin thrown in the pokey” that hampered his ability to get a rise out of ordinary blacks and scared the civil rights hierarchy. However, it seems as if Izrael felt that he couldn’t criticize (or conveniently forgot to criticize) the Black Prince himself, El Hajj Malik El Shabazz, in light of recent scholarship, for fronting off as militantly heterosexual when his sexual history had proven otherwise. At least Bayard Rustin never hid who he was, like James Baldwin; Malcolm, though, according to one of his biographers, Bruce Perry, had far more to hide and everything to lose.

Bruce Perry’s landmark biography of Malcolm X, Malcolm: The Life of the Man Who Changed Black America, appeared in 1991, and caused shock waves among those who had taken his Autobiography as gospel truth. It wasn’t. And it’s been very hard and very painful, in the eighteen years since it was published during the resurgence of interest in Malcolm, for blacks to accept the very real possibility that Malcolm may have been bisexual or gay. Moreover, that his faith and marriage to the beloved and revered Betty Shabazz may have been a way to subsume his desires as well as his affinity for living on the edge and fit somewhere, anywhere in the world. It’s commonly known as putting up a front.

I do not, however, share the view of British gay rights activist Peter Gary Tatchell who wrote in The Guardian in 2005 that Malcolm El Shabazz was some kind of black gay hero. Furthermore, blacks still rationalize Malcolm’s previous homosexual activities as stuff that he did before he got “cleansed” through the teachings of Elijah Muhammad, and became “straight.” They see homosexuality as something close to criminality, that it was a “white (or Arab) disease,” and that it can be altered or changed through the right religion or woman. They point to Betty Shabazz’ unwillingness to work with Perry when he researched his book as proof that he had some fish to fry or some dirt to expose. I would ascribe it to a widow’s unwillingness to speak ill of her marriage bed and an inability to detach herself from a famous–and some would say, near-mythological–husband, which is perfectly apt in the circumstances. Tatchell says something, however, that I do agree with:

Was Malcolm X gay? Bisexual? In his schooldays, he was apparently a passive participant. Others masturbated or fellated him. Later, while working as a male prostitute, he took a more hands-on role in sex, especially with [William Paul] Lennon [a rich bachelor who hired Malcolm as a butler]. This part-time whoring may have been pecuniary. There is, however, plentiful research suggesting that many guys who have sex with men for payment are in denial about their homosexuality. They tell themselves they are doing it for the money. This is their way of coping with same-sex desires that they are unable to accept. Was this Malcolm’s excuse? Surely there must have been some degree of queer desire to enable Malcolm to sustain his sexual experiences with men over a period of 10 years? If this desire was within him from adolescence to early adulthood, could he have erased it completely in later life?

Sexuality is not like a newspaper–read today and discarded tomorrow. Established desires can be sublimated or repressed, but never eliminated. If people have a homosexual capacity, it stays with them for life - even if they never act on it. (Emphasis mine)

I doubt whether we would have seen Malcolm X on Oprah talking about his life on the downlow. But like many religious leaders from Henry Ward Beecher to Elijah Muhammad, their sexual behaviour off the pulpit or the lectern hasn’t always been pristine–it’s been downright weird. (The same could be said for political leaders as well.) The ways in which the Nation of Islam brought Malcolm and Betty together in matrimony seem rather distancing and has little to do with what I think of as courtship rituals. The faith showed the same fear of, and depreciation of women as with other ultra-orthodox Islamic groups. It was the same distancing that Malcolm had towards women in general, tainted by his relationship with his mother. In other words, his was an arranged marriage, made up to ensure and to confirm Malcolm’s masculinity and power in the relationship. The woman came to him, or was brought to him. And it does not imply that Malcolm did not come to love Betty. However, in pursuing gay relationships as an adult, in Perry’s book, he went after what he wanted.

I can now think of all this in light of the debate between Bayard Rustin and Malcolm X in 1962; it is what we know now against what we didn’t know then. When Malcolm died, all of his potential died with him. He remains frozen in time, the Black Prince who embraced heterosexuality as well as a black, black woman, as Alice Walker once said of him. He was also fronting. Even the Autobiography is a front, that is, a lie. This is not food for gossip magazines, but food for thought in all of our relationships and alliances.

When Bayard Rustin died, he died reviled for being an openly gay man who had few regrets for living his life, as well as being a black man and a progressive, who supposedly nearly hampered our walk to freedom. The redeemed, but hidden Malcolm was able to witheringly excoriate Rustin from a high place of judgment and superiority in everyone’s mind. He was unable to evince little empathy or even a pang of insight for Rustin across the differences, even backstage of the public arena, for fear of being exposed. It paid for Malcolm to remain heterosexual for the rest of his life, and for the life of his legend. And that is both the horror and the regret of that moment in time, in that debate between Malcolm X and Bayard Rustin, that needs to be iterated in any kind of film biography of this great, nearly-forgotten black leader.