Well, well, well…I was on twitter when I noticed a link to Queerty.  It peeked my curiosity so I headed over to check it out.

The question posed in the post is, “How many lawyers does it take to overturn Prop 8?  It was accompanied by the following photo. 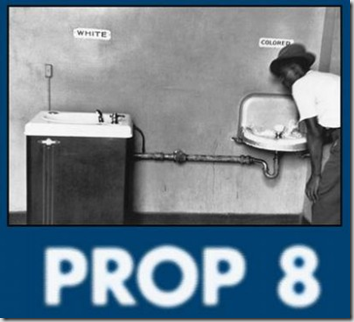 Isn’t that lovely?  Of course we are not supposed to get upset with this obvious racist depiction, or the appropriation regularly engaged in by white gay and lesbian leaders to argue a case against the second class status of the GLBTQI community in the larger social sphere. How dare we uppity blacks demand that we have control over our history and how it is used when white gays and lesbians have a point to make.? The world needs to know that they are being treated like niggers and all is wrong with the universe if whites are being reduced to status of blacks.

Even in the face of the obvious racism both the Black Caucus and the NAACP have come out in favour of increased right for gays and lesbians, as well as openly supporting prop 8.   The GLBTQI community continues to present blacks as uniquely homophobic, while failing to acknowledge the work that we have done to support gay rights.  Even after the exist polls from Prop 8 were proven to show that blacks did not vote in the manner that was first reported we continue to be attacked by the white gay leaders.

Here is a tip, if you want blacks to be allies I suggest you stop appropriating our experiences to serve your own ends.  Between the gay is the new black meme and the continual charges of homophobia, with no effort to have a constructive conversation with the Black community you are alienating people in droves.  Stop white washing history so that POC can see themselves reflected in the struggle for gay rights.  This is absolutely imperative because for Blacks to identify, they need to understand that this is about more than a bunch of whiney white people.  We have heard enough about whiteness being marginalized when they still continue to exist with the most social power.  Make the issues that are important to black members of the GLBTQI community an important part of organizing, rather than turning them into invisible members that you can call upon for support without any form of reciprocity.  Finally, recognize that while you are dealing with an obvious oppression you still exist with a lot of social privileges.

I am continually shocked when white members of the GLBTQI community  express shock when some members of the black community don’t readily embrace them.  It is clear that white privilege continues to blind many to the ways in which they have made this movement all about them.  Until an intersectional approach is taken to gay rights and all voices are equally recognized, all activism will continue to meet with resistance and anger.  The civil rights movement was successful in part because whites and blacks marched together and that is the lesson that gay rights activists need to remember in their fight for justice.  The path to equality lies in forcefully asserting the humanity of all.