This is a guest post from Silvia of A Just Society. 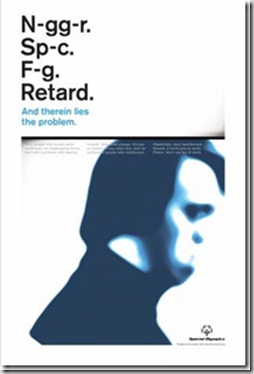 to recognize and rethink their use of the word “retard,” or as the organization would prefer, the “R-word.”

“Most people don’t think of this word as hate speech, but that’s exactly what it feels like to millions of people with intellectual disabilities, their families and friends,” a statement about the campaign reads. “This word is just as cruel and offensive as any other slur.”

Raising awareness about intellectual disabilities is a great idea. But the execution of this campaign is very problematic for three major reasons:

1. eliminating the R-word does not erase ableism,

2. setting disability against race and sexual orientation denies the realities of oppression that these groups still experience, and

3. de-linking the R-word from underlying societal power structures means that the campaign is attempting to erase a word from our vocabulary without creating any real social change.

I’ll discuss these three points in more detail below..

Eliminating the R-word does not erase ableism

The small type on this ad reads: “Most people who would never knowingly use disparaging terms don’t see a problem with retard.” To some degree this may be true. In many social settings, public use of the N-word has indeed become highly unacceptable. But racism is still omnipresent and verbally articulated, without any mention of the N-word needed.

Even in multicultural, “enlightened” Toronto, much overt racism can be heard. In my own area, I’ve often heard statements like: “The real problem in this neighbourhood is the Blacks.” “Black people are lazy. I work two jobs to stay off welfare, but they…” Erasing the N-word from socially acceptable speech has not erased the reality of racist speech.

Nor does erasing the N-word give blacks an equal position in society and equal access to resources. And the recent election of a black U.S. president has not changed that reality.

Just this morning I was saddened to hear that a female friend of mine, taking photos of a storefront on Yonge Street for a college project was harassed by the police for the crime of “walking around black”. Her little girl witnessed the entire incident. My friend had broken no laws, since she was on public property while taking a picture of a commercial building. I cannot count how often this kind of thing happens to my black friends.

Oh… but you can’t say the N-word anymore! So obviously racism isn’t so much of a problem anymore, right?

During the U.S. elections, we saw footage of people who were not reticent to make openly racist remarks and use the N-word. At least with these people, you know what you’re dealing with. It’s open and clear. It seems to me that the more liberal the social setting, the more that racism goes underground.  Black friends have sometimes said they prefer overt racism to subtle, underground racism. It’s harder to detect, harder to name, harder to fight. And it makes it easier for all us good-thinking white people to pretend that we don’t contribute to racist realities.

So I would like to say to the Special Olympics folks, when you focus a campaign on the erasure of a word – and nothing more than that –  you’re not doing anything to deal with the problem.

I would also ask: If people would stop using the R-word because it becomes socially unacceptable to do so, would that translate into respectful treatment of people with intellectual disabilities, equal access to employment and other social resources, and protection from marginalization of all kinds?.

The Special Olympics seem to also be playing the Oppression Olympics.

The ad implies that racism and homophobia are much less of an problem than ableism. But a social justice initiative that pits one group against another is essentially trying to improve the lot of one group by minimizing the oppression of others.

This ad seems to be saying, “We’re more oppressed than blacks, latinos, and gays.” That’s a very offensive comparison, for reasons I have already mentioned. And there’s been too much competition  between oppressed groups, perhaps most noticeable after the passing of Proposition 8 in California. An important segment of the gay community felt betrayed, because the American people had elected a black man to the presidency but failed to defend the rights of gays and lesbians. In fact, some went even further by blaming blacks for being more homophobic than whites – making them responsible in large part for the passing of Prop 8. Black bloggers such as Renee at Womanist Musings quickly responded to the racist assumptions and factual errors inherent in these accusations.

This ad campaign risks setting up a similar conflict between different oppressed groups.

In fact, a discussion about this ad campaign shows how it has been received by some belonging to other oppressed groups. One commentator (referring to a diffferent ad in the series), states:

I’m Jewish and I’m personally offended that “Jew him down” is clearly written, yet Nigger, Spic & Fag are written with dashes. So basically you don’t want to “fully” offend the Niggers, Spics, & Fags, but you have no problem offending Jews?

(This person actually mixed up two ads in the same campaign, but my point is that the nature of these ads sets up the reader for these kinds of perceptions, e.g.,  that the other groups are treated more respectfully by the campaign than are Jews.)

Small mindedness will only hurt you. Why must you call those with intellectual disabilities a negative name, if they have done nothing to hurt you? Why pick on people who can’t defend themselves in the same way that someone who was a “nigger” or “fag” can? Your small-minded comments represent your extreme insecurities, so take them someplace else.

Ah. A “nigger” or “fag” is better able to defend themselves than a person with an intellectual disability. Just take a moment to think through the implications of this comment….

I believe that unless an intersectionality analysis is applied, we will continue to see one oppressed group competing against another. Such an approach also views each group as homogenous and assumes they live with only one dimension of oppression.

I could refer back to my previous post on an anti-oppressive approach to AD/HD, in which I cited Gail Mattox, a member of the Black Psychiatrists of America. Mattox points out that black children with AD/HD receive treatment at half the rate of white children, with key factors in this disparity being: poverty, culturally inappropriate services, lack of information and misinformation in black communities, and the fact that many black children are in care. Why would it be any different for black children with intellectual disabilities?

So how can you list different oppressed groups and set one against the other? By doing so, you are oppressing some people in your own group.  As Renee noted,
"When the oppression Olympics is played this way, it also resorts in a form of erasure. There are POC, as well as gays and lesbians, who are differently abled. This kind of organizing sets up an understanding of disability that once again privileges white heterosexual bodies. By fighting the issue this way all that they are doing is reaffirming hierarchies of bodies that are already in existence. It is problematic to say the least."

What’s in a word?

The R-word is a word.

Language is extremely important and, I believe, it plays a crucial role in creating and sustaining our social realities. Yes, the flippant use of the R-word is not only offensive, but continues to subjugate and stigmatize people with intellectual disabilities.However, any strategy that seeks only to erase a word from our vocabularies can never change the underlying realities of oppression.

In this campaign, the R-word has been de-linked from the power structures of a society that marginalizes people with disabilities. Instead, the R-word has been linked and compared to other hateful labels that have since been erased from the conversations of enlightened people. By decontextualizing all these words from the societal power relations they represent, this campaign will accomplish little or nothing of any substance that will help people with intellectual disabilities. The R-word becomes just a word.