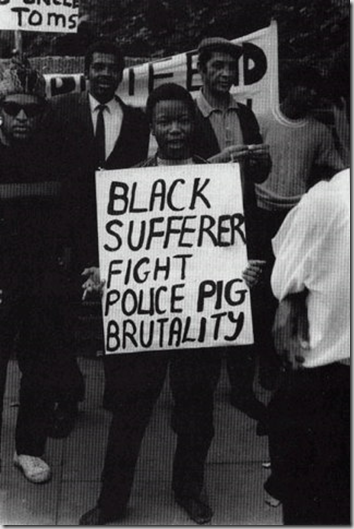 It began with a photograph. A picture without colour, of a lone Black girl, barefoot, holding a placard that read: “Black sufferer fight police pig brutality”. A Black girl who came before the words and aesthetics of Black resistance became commodified for white, middle-class audiences via mainstream pop and HBO, before anti-racist politics became institutionalised in ivory towers and non-governmental organisations.

The girl was Olive Morris. And the message was clear as day. Not only in its broken syntax, screaming of an organic sense of defiance, but also in its rough aesthetic. The picture of a young Black girl with shorn hair, standing in the middle of Brixton with a fag in one hand, a sign in the other and an unforgettable sneer across her face. This is how the Do you remember Olive Morris? project began, which now encompasses the work of a dynamic collective of women who span a range of nationalities, ages, colours and convictions.

It began with the impassioned vision of London-based Uruguayan artist Ana Laura Lopez de la Torre who, in conjunction with Gasworks, a South London gallery committed to promoting community-based and international artistic/activist projects, is now creating a public art exhibit which will touch on Morris’ life and the significance that remembering figures like her has for contemporary Black feminism in the United Kingdom.

There is something about this photo that both inspires and haunts. There is something about Morris’ face, alight with an arrogance and an unapologetic passion of youth that cannot be dismissed and should not be forgotten. What does it mean in a time of deep cynicism, in a time in which activism often acts as a bad cliché that people pass through like fashion trends, to remember Olive Morris? What should and can this act of remembering, this investment in the past, mean? Beyond nostalgic kitsch, is there value in investing in recollections of past struggle, of revolutionary figures who can be forgotten as quickly as they can be sentimentalised – gestures that fail to address contemporary questions of racism and sexism in the UK?

Finish Reading at the F WORD