Rihanna Is Erased By Do Something.ORG When They Confront Domestic Violence

Earlier this morning I was sent a link about a campaign run by DoSomething. org.  In an effort to raise awareness about violence against women they have created a re-enactment of the beating that Rihanna allegedly received from Chris Brown.

Extreme Trigger Warning on the video. 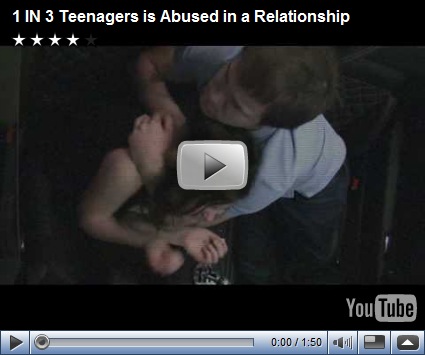 At the end we are told that 1 in 3 teens are abused in a relationship and viewers are encouraged to go to DoSomething,org/Abuse to get three free bracelets, one blue and two black to raise awareness.  Violence against women is just the latest cause to get the “Bono of activist treatment” (read: the bracelet, or the ribbon certification).

These bracelets have become the symbol of our so-called concern for diversity and tolerance, and yet they function just like any other fashion appendage.  Does anyone really know what each one of the multi colour bracelets and ribbons even means anymore?   We have this social idea that putting on a symbol of an issue somehow means we have performed some sort of activism. The bracelet, or ribbon allows us to profess a stated belief without making any concrete efforts for change.   It functions more as a badge of inertia than anything else.

I fail to see how we can possibly praise this video as womanists/feminists and  yet Courtney of feministing has completely endorsed this video.

While I could understand why some people would be outraged by this bold PSA tactic, I'm completely in support of what Do Something is doing. They're making the incident--which has been so obscured by the media hype, ignorant commentary from pundits and the public alike, and so much disrespect--real again. A woman, a man, out of control emotions, and inexcusable violence. If Rhianna weren't already horribly outed by this whole incident, I might feel like it were an invasion of her privacy, but at this point, it's just so public. It seems like the most respectful thing we can do for Rhianna is make sure that this whole thing inspires young people to get educated about relationship violence--as the ad does.

So, because she has already been violated once, what’s one more time?  We can comfort ourselves with the belief that no matter how triggering it may be for her to be held up as the “role model” for battered women, it’s for a good cause.  Let’s remove the last bit of agency and self respect that she has by co-opting her experience without permission because ultimately we secretly identify with her abuser anyway; how else could we justify displaying a total lack of solidarity with the victim ?

This is about realism right; so showing simulated violence which in no way reflects the real terror she must have felt as Brown spilt her blood all over his car is showing the horrors of domestic violence?  Hearing the monotone drone of the narrator as he describes what have must have been the most terrifying moments in her life, instead of her screams of pain and fear is meant to place her in the center of this incident?

In the final act of co-option the woman chosen to play her isn’t even black.  So in a bid once again for realism, it is somehow appropriate to replace a black woman with a white woman?  What does this tell us about which bodies are valued in this society?  Are we to feel more sympathetic to this pseudo-victim because she is white?  Are we meant to have an easier time identifying with her because of whiteness?  In a world in which the black woman is daily devalued, replacing her physical body without commentary and assuming that whiteness can represent her is truly a racist act.  Just as in Richard Wrights, The Outsider, though both white women and black women are victims of  violence, it is the harm done to the white female victim that is understood as the truly criminal act.  This is not because we value white women universally, but because we over value whiteness to the extent that any crime committed against it is considered a true social violation.

This video is not the least bit groundbreaking and in fact plays on racism and false images of violence to promote hipster activism.   We live in a society that believes that problems can be solved through capitol rather than engagement.  We wear our so-called causes around like latest fashion accessory happily moving from issue to issue, as each social problem comes in and out of vogue.  Though this model has failed to produce any tangible results, we continue to embrace it because we like our activism life McDonalds; fast, cheap and full of unidentifiable ingredients.