Sarah Gronert Is Not A Man 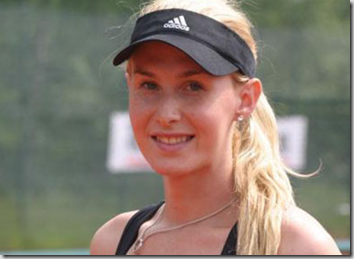 How many times are people that are trans or inter sex going to have to declare their gender before cisgendered people accept them for who they are?  Sarah Gronert  was born intersex but underwent surgery to completely align her genitalia with her feminine gender.  Okay people, even if she had not had the surgery the fact that she declared herself a woman to begin with makes her one. What is so hard to understand about that?

After more thought it dawns on me, it’s not the concept that is difficult to understand, it is just that people are so damn bigoted that privileging cisgender bodies has become natural.  Whenever we can identify a minority group whether it is by gender, age, sexuality, or class, our society is structured in such a way that the tyranny of the majority will always ensure that certain groups are oppressed and stigmatized to support our belief in a hierarchy of bodies.

What is really so threatening about this woman?  She is 619 in ranking, and has only won two titles.  What people find so unsettling about Gronert is her potential.

Schlomo Tzoref, who coaches player Julia Glushko, told the New York Daily News that Gronert has a clear advantage and should not be able to compete against women. "There is no girl who can hit serves like that, not even Venus Williams," he said."This is not a woman, it's a man. She does not have the power of a woman and no woman has such a technique," he added. 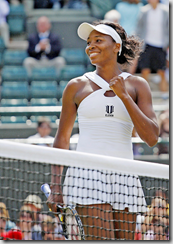 Interesting that Tzoref would turn to Venus as an example considering that until this time the Williams sisters have been overly masculinized by the sport of tennis.  How many times have these beautiful women been called ugly, menacing, or unkempt in an effort to demean and diminish their invasion into what has been a white sport?

Tzoref could have picked several woman to place Gronert up against however, choosing Venus shows they extent to which many in this sport still are unable to own their various privileges.  The black woman has long been considered the eternal “unwoman” and “other” in comparison to a white woman and it is only when placed against an intersex woman that somehow Venus can finally have her womanhood validated. What is this but yet another stunning example of our hierarchy of bodies?  For tennis it seems the order of acceptability is white women, WOC and then intersex women.

Women like Gronert and Venus are threatening because they are talented and champions.   Whiteness and cisprivilege means that certain bodies are thrown roadblocks to success and when they achieve in spite of the disadvantages that have been placed in their way, further disciplining is often instituted to further destabilize their persons.

Fact is both Venus and Gronert are talented women and they are threatening to tennis pros because of their ability to succeed.  At one point due to the harassment, Gronert had even considered leaving the sport but thankfully she has somehow found the strength to keep fighting in the face of the hateful taunts that have been thrown at her.  Accepting them and honouring their achievements is not about creating special categories, or some form of new liberalism, but realizing that the definition of ‘woman’ is fluid and out of a respect for humanity all bodies need to be valued.