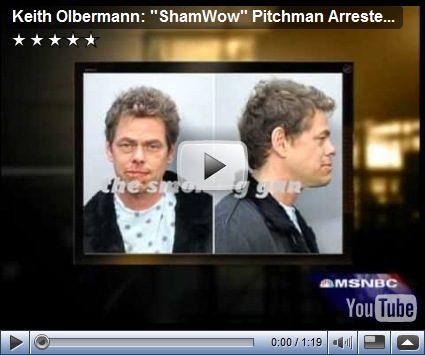 The minute I first saw the Sham WOW guy something about him struck me as wrong.  I couldn’t put my finger on it, and I could not justify it but I did not like him.  It seems that instincts were correct.  The fact that he felt the need to purchase the services of a sex trade worker and then physically assault her speaks loudly about the kind of person that he is.

In watching this video I am further disturbed by the fact that Olberman seems to think that this is a laughing matter.   Battering a woman can never be funny even if we have issues with the abuser.   I get the sense that this is considered hilarious  because the woman that he attacked happened to be a sex trade worker.  These women are routinely abused and their assaults go uninvestigated.  When the police do take the time to arrest the abuser, the criminal justice system does not punish crimes against them at the same rate.

We need to stop slut shaming women and assigning a spoiled identity based on sexual behaviour.   The fact that we can continue to write these incidents off as a comedic occurrences speaks loudly about the ways in which patriarchy continues to attack all women.   Using a so-called spoiled identity to justify violence only serves to discipline us all.  If society suddenly decides that we are unworthy who will care when our blood is spilled?

As a white male of privilege, Olberman does not have to risk his life to earn his subsistence.   He does not have to worry that when he has a run in with “officer friendly,” that that the interaction will lead to a sexual assault or some form of violation.   He will not be chased out of neighbourhoods as though his entire being is diseased.  In the end Olberman and crew can afford to find this laughable because it does not directly effect them and works to maintain their undeserved privilege.  Vince the Sham Wow guy maybe slim but so is anyone else who thinks that violence against women is something to laugh about.