Joe Arpaio is the sheriff of Maricopa County.  He has used the rhetoric of tough on crime to terrorize inmates and communities of colour.   The perversion of the criminal justice system to employ power to maintain white privilege and thus demonize bodies that have been traditionally marginalized are reflected in his policies.

Under his stewardship many have met their deaths.  In the tent cities that he created to deal with prison over crowding, the temperatures can reach as high as 150 degrees in the summer.   To emasculate inmates he forces them to wear pink clothing.  He also feeds them bologna sandwiches twice a day that turn green in the extreme temperatures.  Though he claims to represent the law, he has refused to allow women transport to hospitals to have abortions.

Arpaio has become a law unto himself.   Using fear he justifies his inhuman treatment of inmates. 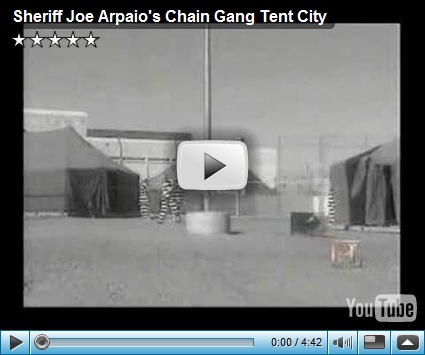 His behaviour of public shaming, and outright criminality has far from saved the state financially.  His practice of feeding prisoners just twice a day with spoiled food, his reinstatement of the chain gang and his cruel treatment of inmates—including those awaiting trial who have not been convicted of any crime—have cost Maricopa County more than $46 million in lawsuit settlements.  In July 2008, the ACLU of Arizona filed a class action suit accusing the Maricopa County Sheriff of illegally profiling [email protected] On Feb. 11, the Federal District Court for Arizona ruled that the lawsuit could proceed.

Much of the work to fight his racist, classist and abusive behaviour has been fought by local activists.  On February  28, thousands participated in a rally to bring an end to the cruel reign of Arpaio and the end to Section 287(g) of the Immigration and Nationality Act, which permits Arpaio to enforce federal immigration law.

Janet Napolitano, now DHS chief, was governor of Arizona when the criminalizing of an entire population began: the militarization of the border and the steady movement of Border Patrol presence northward, the implementation of Operation Streamline—a federal program that detains approximately 70 undocumented workers per hour, then turns them over to privately run prisons to serve their sentences—and the so-called Employer Sanctions law, which is really aimed at workers.

The time has come to stand against this kind of assault against humanity. ACORN is calling on House Judiciary Committee Chair John Conyers to investigate Sheriff Arpaio both at state and federal levels.  Arpaio is nothing more than a terrorist who has been granted legal power to assault people and his rule must come to an end.  We cannot claim to live in a justice society as long as tyranny is representative of the law.  Please take the time to sign the ACORN petition.  No matter what crime a person has committed, they are still a human being and tough on crime should never be associated with crimes against humanity.