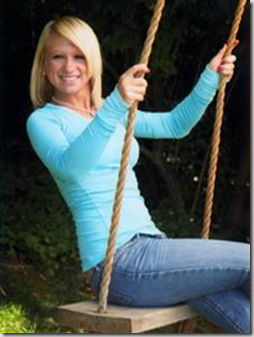 Her name was Jesse Logan and she is dead.  This young woman hanged herself after repeated verbal abuse from her classmates regarding nude photos of herself that she sent to a former boyfriend.

Walking down the hallways she reported being called a slut, whore and having things thrown at her.  Imagine having to face that kind of treatment everyday just to get an education.

Before she committed suicide she had an interview with the media where she detailed the horrible treatment that she was receiving.  Just two weeks after taking her story public she was dead.

Much of the reports on her death have focused on the issue of sextexting i.e sending sexually explicit images over the internet.  Law makers are concerned that this is a form of child pornography.  The real issue should be what happens to these images once they are released and how they are interpreted by society.

If Jesse had been male, would these kids have thought to use the taunt of  slut and whore? These words are specifically targeted at women to make them feel shame for daring to be sexual.  We live in a society where female bodies are often sexualized for the benefit of the male gaze and yet if a woman chooses to be an active body and reveal her body for her own gratification she is shamed publicly.  Sex is something that we are told that we may only submit to unwillingly.

Even when we apply the words slut to men we routinely ad the word male in front of it to denote a change in referring gender i.e. male slut, male whore.  Instead of dealing with this as an issue of restricting pornography, we should be concerning ourselves with the warped message that the young are receiving as it relates to gender and sexuality.

We are sexual creatures and the fact that we deny this essential part of our nature is ridiculous.  The same behaviour that we promote and encourage in males, we stigmatize and discipline women for.  A man that has various sexual partner is a stud, a hero of sorts and yet a young woman engaging in the same behaviour is slut shamed.  We claim that we have reached a post feminist time and yet we regularly punish women and attempt to control their behaviour.

The demands of purity are very much a part of how we raise our daughters.  Each day they are inundated with sexualized images of women and are then taught not to engage in sex unless it occurs within the context of a patriarchal marriage. We teach them to leverage their bodies for the brass ring as though marriage will somehow guarantee them a form of security.  For women in particular, gender becomes a performance with few rewards.  The basis of female life is submission to male desires, needs, and wants, and it is this point that needs to be understood by all.  Yes there is a need for feminism.  Young girls need a haven that they can turn to which will teach a positive affirmation of their bodies and their lives.

Sending a nude picture of yourself should not lead to this kind of treatment and schools need to take the issue of harassment seriously.  It is not a simple matter of hurt feelings; for some it is a life and death issue.   Any action that diminishes another should not be allowed on any school property.  They are responsible for creating a hostile free learning environment and by not taking corrective measures all they did was teach Jesse’s assailants that they were right to taunt  her in the manner that they did.

When incidents like this happen we need to pay close attention to how they are spoken about.  This is not about sextexting, this is about gender based harassment and slut shaming.  No young woman should be made to feel desperate enough to kill herself because we refuse to believe that women should have the right to display their bodies or be sexual outside of male control.