Some Albertans Think That Bush Is Worthy Of A Shoe 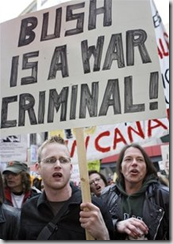 It comes as no surprise that Bush decided to make his first post white house speaking engagement in Alberta, Canada’s most conservative province.   I am sure he felt quite at home with the elites that have made their fortune in the oil industry.

It is only in this environment that he could comfortably quip, “I actually paid for a house last fall. I think I'm the only American to have bought a house in the fall of 2008."  Perhaps if had not been such a dismal failure as a leader more people might currently be living in prosperity.  At no time throughout his presidency did he focus on the needs of the poor or the underclass.  Under the mantra of responsible conservatism he lowered taxes on the rich and refused to institute any form of oversight or regulation.  In 8 years he managed to not only blow any gains made by the Clinton administration he, plunged the US so far into debt that it will take generations to eliminate it.

He further announced on plans to write a book about his 12 toughest decisions in the white house.

"I'm going to put people in my place, so when the history of this administration is written at least there's an authoritarian voice saying exactly what happened," Bush said.

"I want people to understand what it was like to sit in the Oval Office and have them come in and say we have captured Khalid Sheik Mohammed, the mastermind of the Sept. 11 attacks, the alleged killer of a guy named Danny Pearl because he was simply Jewish, and we think we have information on further attacks on the United States," Bush said.

I imagine that he is searching for a ghost writer as we speak.  Just from watching his live television interviews it is clear that english is still a second language to this man.  Not only does he invent words, his arguments are often nonsensical in an effort to present a grandiose image of himself.  Bill Clinton did write a book after leaving the white house however, the difference is that Clinton is actually an intelligent man.

I was completely disappointed when I learned via Monica of Transgriot that my fellow Canadians  actually paid 400 dollars a plate to break bread with a war criminal.  What else can we call a man that lied to justify an illegal invasion of a sovereign country?  Of course Bush fits right in, in a province that elected and then re-elected Klein. Alberta may be rich in oil today but plenty of its citizens continue to live below the poverty line.  Its war on the poor to balance the budget meant that those already living on the margins were trampled upon.

Were it not for the fact that some brave Albertans had the good conscience to protest Bushs arrival in the great white north, I might have been tempted to quip that the wrong province wants to secede. In every single city that Bush goes to, the message needs to be sent that he is a criminal and the money spent on helping the homeless and the underclass that he so callously ignored during his time in office.  To those of you that supported a war criminal and cheered his efforts shame on you.  To those that decided to protest and let the world know that not all Canadians believe that this man should be respected, I  would love to share a Timmys coffee in celebration with you.  Next time lets just meet the bastard at the border with either an arrest warrant or a huge stay out sign.